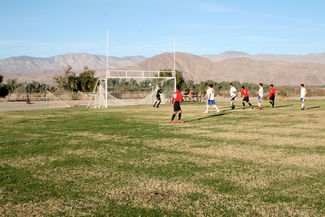 It's more like a baseball score than soccer. The Rams boys' soccer team started scoring early, less than two minutes into the game against the Hamilton Bobcats Dec. 12 at home. The team scored six goals in the first half, followed by another four in the second.

The Rams dominated offensively, and played well enough defensively to keep the Bobcats in check throughout the game.

Head coach Ricardo Fuentes commented, "We crafted great opportunities on goal, and had key defensive plays near the end of the game." Junior goalkeeper Brian Martinez made key stops of shots on goal in the first and second half.

The Rams scored on opportunities afforded by good ball handling and precision passing up field, and ranged from powerful and accurate kicks into the net, to lucky bounces of the ball landing in the right place at the right time.

Fuentes warned the players after the game not to get too cocky with the win, noting that unlucky ball bounces can result in a loss. On the upside, several missed Rams shots-on-goal were deflected by the goal posts or overhead bar, so the score could have been even more lopsided.

The Rams also faced Guajome Park in an away game Dec. 19, which took place after print.

The team will be back on the field in the new year against Calipatria Wednesday Jan. 9 at 3:05 p.m. in an away game.