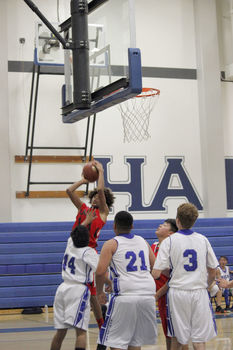 It wasn't the result they hoped for, but the Borrego Springs JV boy's basketball team didn't go down without a fight.

Despite falling short on the road to the Hamilton Bobcats, 57 – 22, Nov. 30, their second game of the season.

"We were a little shorthanded today, our five against their team, but I'm very proud of their hustle and the improvement," head coach Tim White said. "It seems like every week we're gaining more confidence, a little bit better. It won't come overnight, but I'm excited about their growth and looking forward to getting better."

The team had a chance to bounce back and possibly get some revenge on the Bobcats, as the two teams faced off once again on Dec. 11, which took place after print.

In their first matchup, the Rams started off a bit slow to get on the board and were quickly down 5 – 0.

Sophomore guard Cam'mron Jambor got the Rams on the board after driving through the middle for a floater. After being fouled, he sank in the free throw to cut their deficit, 5 – 3.

Jambor was a driving force throughout the game for the Rams, aggressive on offense and defense, and finished the game with 10 points.

The Bobcats put in a three-pointer on their end, but were quickly answered with one right back by sophomore power forward Saul Magdaleno, 8 – 6.

However, the Rams let things slip, as the Bobcats found the basket more times than one to extend their lead to 17 – 6 to end the first quarter.

In the second quarter, the Bobcats started off hot with a three-pointer, and continued their run from there.

Despite the Bobcats controlling the game so far, the Rams were hyped, after Magdaleno hit a shot behind the arc as time expired.

The Rams were held to just seven points in the second quarter and trailed 31 – 13.

For most of the third and fourth quarter, it was back-and-forth down the court, but the Bobcats maintained control of the game.

After not being able to catch up and make it a close game, the Rams dropped the game.

"We just have to work on taking care of the rock. We just had too many turnovers, and we need to work on not traveling, as well as knocking our shots down," White said. "We ran some good offensive sets but they're just learning the system on offense and defense. Taking care of the ball is the number one thing and good things will happen after we do that."

The JV Rams basketball team is back in action at 3 p.m. Tuesday Jan. 15 at home against Mountain Empire for its first league game of the season.