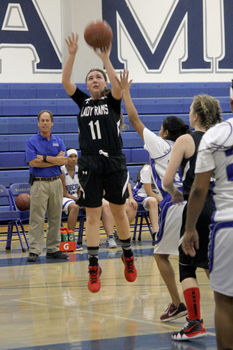 With less than three minutes left in the fourth quarter, the pressure was on for the Borrego Springs Lady Rams and the Hamilton Lady Bobcats basketball teams.

"Comparing them from their first game, a lot better. They played much more like a team, utilizing everyone on the court, and recognizing everyone's strengths," head coach Justine Smiley said. "I think they kept their composure a little bit better. It was closer than I would've liked it to be, but when we play this team it's always back-and-forth."

The two teams faced each other again in Borrego Dec. 11, which took place after print.

The Lady Rams started off the game on the right note, after sophomore point guard Marla Manzano got a steal, then put up back-to-back layups for a 6 – 0 lead.

The Lady Bobcats were finally on the board with a shot behind the arc, 6 – 3, with less than three minutes to go in the first. Borrego extended their lead with a free throw and a jumper at the free throw line by junior forward Delaney Barclay. But were quickly answered back with yet another three-pointer.

Hamilton found some rhythm and quickly caught up the Lady Rams in the second quarter, holding them to just five points. The Lady Bobcats found themselves at the free throw line and wide open in the lane to tie it up at 14 heading into halftime.

Both teams answered each other to open up the third quarter.

Back-to-back steals and layups by Manzano broke the tie to put Borrego back up 20 – 16.

The Lady Rams held off the Lady Bobcats, only allowing the jumper in the beginning of the quarter to be up 24 – 16 heading into the fourth.

It was a slow paced quarter, and it seemed that both teams could just not connect with the basket.

Midway through the fourth, the Lady Bobcats put in back-to-back shots to cut the deficit to 24 – 20.

Senior guard Vanessa Rodarte put up a layup after a steal by Manzano to put their lead back up to six, 26 – 20.

"There's always things to improve on. Letting your offense roll out and being patient with the plays that you have, being more aware on the court which comes with experience," Smiley said.

She hopes the team learns more as the season progresses.

"The program for the last few years has done really well. The girls come out and show they are hard working and I hope they come to practice everyday willing to learn something new, push themselves outside their normal boundaries and they're capable of doing anything if they are open to those things.

The Lady Rams are back in action at home against Calexico Mission Dec. 19 at 3:30 p.m.