Lunch with the Principal at La Casa Del Zorro 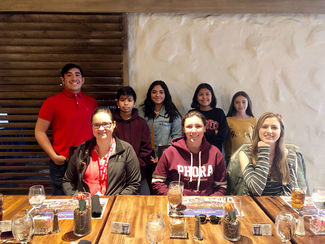 Seven students from the Borrego Springs High School and Middle school celebrated their Student of the Month award with vice principal Victoria Baay for 'Lunch with the Principal' Dec. 3 at La Casa Del Zorro.

General manager of LCDZ Patrick Sampson was glad to host the luncheon once again. LCDZ were hosts to the Students of the Month of September.

The students were excited to see specially made menus for their lunch.

Barclay said she was fortunate to meet new people, and feels that she is showing she has been a great role model. Strate agreed, and added it's an honor to be selected.

Alcaraz, senior, said that it shows all the hard work he puts in, along with sleepless nights is rewarded and worth it. "It's great to see it being recognized, and I'm glad to share this lunch with them."

Many of the students decided to create their own pasta, while a couple went for a juicy Fox Den burger, even hot cocoa. To wrap up the lunch, they enjoyed vanilla ice cream, despite it being quite cold outside.

The students thanked Sampson and the La Casa staff for being generous and kind to host this event time-and-time again.