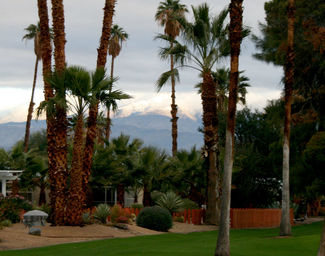 With no appreciable rain in December for three out of the last five years, the gentle but fairly steady rain episodes in Borrego on Dec. 5 (and Nov. 29) provided a total of a little over an inch, and it came as welcome relief.

For the Bighorn sheep up in the mountains, dusty cars, local landscaping, and golf courses that shut off their sprinklers, anyway. There was also an accompanying light dusting of snow on Toro Peak in the Santa Rosa Mountains, a nice touch to enhance the local Christmas spirit.

We don't want to get too far out over our skies, but the December rainfall prior to the Spring 2017 Superbloom was a little shy of "only" three-quarters of an inch, plus subsequent rain episodes in the two months following, with the clincher of one-inch of rain in a late-February rainstorm.

Hope is not a strategy, so Mother Nature will have to make the Superbloom call. We might remind her, however, that past can be prologue.

During the identical time periods from August 1 thru December 9 in both 2016 and 2018, high temps in August were 114.2F and 114.7F, respectively; humidity highs (94%/96%) and averages (30%/32%) were nearly identical; even highest wind speeds and gusts were all but indistinguishable. Looks like a repeat, at least at first glance.

More importantly, the difference between the rainfall totals Aug. – Dec. 2016 prior to the Superbloom in 2017 and the rainfall totals so far this season is worthy of mention: We've had over six-inches so far (our historical yearly seasonal average), while in 2016, during the same period, the total was, as mentioned previously, only about three-quarters of an inch.

This is not to say we're going to move directly into Superbloom territory, rain-wise, but it's worth keeping a weather eye on total accumulation (and timing/amount of late-winter rain) that will surely make a difference as to whether we have a mere bloom or perhaps a Superbloom come Springtime.