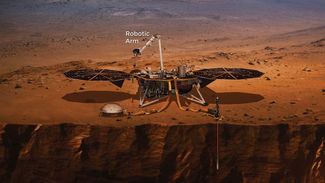 It was pure drama. Would a six-month space voyage to Mars costing almost half a billion dollars end in success or failure? The drama began and ended in all of eight minutes.

Upon reaching Mars on Nov. 26 and ready to begin the 10-mile descent into the thin Martian atmosphere, there were hundreds, perhaps thousands of things that could go wrong during the entry, descent, and landing (EDL) phases of the InSight Mars mission. InSight stands for Interior Exploration using Seismic Investigations, Geodesy and Heat Transport. Potential failures such as overheated wiring or meters or instruments, broken connections during buffeting, sensor malfunction, computer chip failure, all were in jeopardy. NASA never tested the EDL systems as an integrated unit here on Earth because the Mars atmosphere is much thinner than on Earth, and gravity is different, too.

All three phases of EDL had to be controlled completely by computer software because of the eight-minute delay in the signal from Mars to Earth (and then another eight minutes back to Mars). The EDL lasted only six minutes, so there was no time for corrections sent from Earth during any of the thousands of little steps or potential mis-steps.

At the time of the start of EDL, two little probes, launched separately and following the Insight capsule, relayed mission status back to earth, an eight-minute journey.

During that delay, the 800-pound capsule and lander could have either been destroyed, crippled, landed on rock and tipped or flipped, or landed on a slant, thereby rendering Solar panels insufficient for light-gathering and electrical generation. We wouldn't know what happened for eight minutes whether InSight crash-landed or made a successful landing.

"Standing by for touchdown."

A few minutes after the successful landing of InSight, NASA announced that all its integrated systems had reported back "Nominal," meaning InSight was feeling great and ready to get to work. More cheers and applause.