"We are the Champions" – Rams Own The Citrus 8-Man League 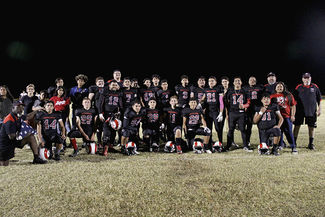 The Borrego Springs football team reigned supreme as it claimed the 2018 Citrus 8-Man League championship Friday with a 67 – 32 win over the St. Joseph Academy Crusaders.

"It's amazing. It is so amazing to put up a banner in the gym after a season like this," head coach Tim White said. "We're extremely proud of the kids' efforts this year, and they're a special group. I've been saying it since before we started that they had a chance to do it all if they wanted to. I still believe that."

The last time they were crowned was in 2014 under the leadership of Andy Macuga, where the Rams also went undefeated, 10 – 0.

Both teams entered the match-up as the top two teams of the league.

It was a battle of the undefeated, but the Rams showed the Crusaders who owned the league, and topped them.

"It was crazy. It was a hard fought battle. They came out to play trying to fight for that league championship," White said. "I think both teams knew it was win or go home. It has been that way for us all season."

"If we could go back in time and do some things differently, I think our week of preparation for that Calvary game, it's probably 10 – 0 and undefeated, we are the No. 1 seed, so I think that was also though the turning point for our season," White said. "The players really learned from that experience, and haven't allowed that to happen since then. So I'm hoping this week, they really rally and come focused and prepared to put in a championship caliber week."

The only loss for the Rams came in Week 4 against Calvary Christian, where the team fell 60 – 48.

The Rams will face No. 1 Foothills Christian in the semifinals of the CIF San Diego Section Division 8-Man football championships, going in as the No. 4 seed.

White said he is a bit disappointed at the ranking they were given, knowing they deserved a bit of a higher rank. However, he said they will be focused.

"I've never had a good experience going to Junior Seau Park, but we live by the saying to "not get mad, get even," and I hope we go down there and right a lot of wrongs that have happened over the last couple of years, and make most of the opportunity, and get to play the winner of Thursday nights game against Calvin Christian and San Diego Jewish Academy at Mission Bay," White said.

"That's our ultimate goal, so Foothills Christian is our next task at hand, and we're gonna stay focused on them, and make it to that championship game."

Prior to handling business against St. Joseph, the Rams faced off against Ocean View Christian in their last home game of the regular season Oct. 19. The team bested the Patriots, 71 – 38. Yes, 71.

"They came out ready to fight, not willing to just show up and let us take the win. I'm proud of Coach (Ronald) Loewenthal and his players. They posed a big problem for us in the first half," White said.

"We found it very difficult to stop their offense, and we weren't aligning right, but we made adjustments at halftime, and it showed. I don't think I've had a better offense in all my years of coaching than this group right here. Honestly feel like the Air Coryell days when my dad was playing with the (San Diego, now Los Angeles) Chargers, like every time we touched the ball on offense we're gonna score."

White also credited the run game of senior running back, linebacker and kicker Juan Carmona, which has greatly improved as the season progressed, and quarterback junior Ty White for stepping up in place of the injured senior Fernando Alcaraz. "Proud dad and coach too," he said.

The Rams, as dominant as they are, were on the board first with a 20-yard gain by senior wide receiver and defensive back Alexys Padilla for the first down on the 6-yard line. Again, Padilla was handed the ball and pushed his way through the left side for a touchdown with 4:23 on the clock. Rams led, 7 – 0.

Padilla led the team with four touchdowns and 210 rushing yards.

"Getting Alexys (Padilla) back this week is amazing, and you can see how talented that young man is," White said.

However, it didn't take long for the Patriots to answer right back. A 28-yard pass from freshman quarterback Tony Valdez to sophomore cornerback and wide receiver Jakob Bravo who was wide open down the field, and a successful two-point conversion put the Patriots up, 8 – 7.

Both teams scored in the last minute of the first quarter, but the Rams were down 16 – 14.

To begin the second quarter, Carmona ran for a 79-yard touchdown on the kick return, weaving in-and-out going down the field. This put the Rams back on top 21 – 16.

However, Ocean View again, found a way to answer back with a touchdown and two-point conversion of their own. Midway through the second quarter, both teams continued to battle, putting a score up on the board.

During halftime, nine seniors – Carmona, Padilla, offensive and defensive linemen Luis Hernandez, Angel Fergoso and Lucas "The Bus" Morales, wide receiver and kicker Manuel Fuerte, tight end and defensive lineman Victor Arias, and quarterback Fernando Alcaraz, who is currently out with an elbow injury – were honored. This also included senior Carlos Meza, who served as the teams' manager for two and a half years.

"Man, I don't know what to say. When I took the job three years ago, I knew that was a special group," White said.

"I earmarked this year as one of the years for the chance to do something special because of how close those kids are together. Not just as players, but as a family, and you can't hope for anything more than that as a coach to have eight seniors on an 8-man football team that gel together like they do. And to finally get Carlos out there (on the field) after serving as our team manager is something special."

To start the third quarter, Carmona did it yet again. He returned the ball for an 80-yard touchdown, and it comes at no surprise to everyone. Against Warner Springs, he had two, both for over 80 yards. The Rams were up 51 – 30.

With less than a minute to go, junior tight end and linebacker Ulices Vilchez went on a 36-yard run for a touchdown on a 3rd-and-1 to extend the Rams' lead, 58 – 30.

The Patriots answered back with four seconds left to go on a quarterback sneak up the middle for 46 yards on second down, and managed to convert another two-point conversion, 58 – 38. This would be their last score of the game, as the Rams shut them out in the fourth.

The fourth quarter was all about defense, as the Rams held the Patriots. Carmona and Arias each had a touchdown for the Rams to add to their lead. The clock ran down to zero, and the Rams were victorious, 71 – 38.

Carmona led the team in all purposes yards with 333.

"Ah, this season has been amazing. It's iron man football. Guys play three ways, not just two, and majority of our starting offense, defense and special teams is just that. Guys playing all three phases of the game, and their efforts shows it," White said.

"They've had the next man up mentality. When a guy is out or injured and the next guy steps up, and that's a real true definition of a great team is when you're missing one of your players on the field, and the next guy comes in, steps up and you don't miss a beat, it just shows how great of a team this group really is."

The Rams will face off against No. 1 Foothills Christian Knights in El Cajon Friday Nov. 2. Kickoff is scheduled at 7 p.m.