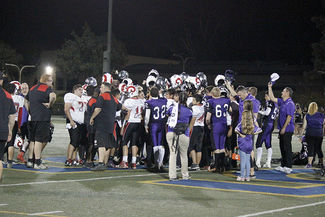 The Borrego Springs Rams football team's season came to an end Nov. 2, after falling short in their match-up against Foothills Christian in the first round of the 2018 CIF San Diego Section playoffs.

"Well we came out a little flat, and they didn't. They're a great football team and I can't take anything away from them," head coach Tim White said. "Our team, I say this again and again, they're so special. They never gave up, kept giving it their all till the end."

The team adjusted nicely in the second half of the game, and fought hard, but tough calls hurt the Rams, who were unable to recover from them.

"We kept hurting ourselves, and kept putting ourselves in tough situations to overcome. We had our opportunities in the second half, and it just made it tough when you don't execute," White said. "It just didn't go the way that we wanted it to."

Despite their early exit in the playoffs, this doesn't take away the incredible season the Rams have had, outscoring their opponents 482 – 266 in the regular season. Not to forget, claiming the Citrus League Championship.

The Rams wrap up their season 9 – 2 overall, and undefeated 6 – 0 in the Citrus League.

"I'm proud of the kids, I'm proud of this team and all their efforts," White said. "It's hard going 9 – 1, making the playoffs, and not coming out as champions. It's hard to finish like this."

"They're a special group, and they will definitely be tough to replace next year," White said. "They stuck together, brought the young kids up, worked hard, showed up everyday, and put in the effort to earn the record that they did and a league championship. It's going to be exciting to hang that banner up in the gym."

The Rams hoped to get the game going on the right foot, but struggled to get across midfield, and the Knights quickly took advantage of the placement, as they blocked a punt at the 10-yard line, and returned it for a touchdown.

The Rams' defense held the Knights in the third and fourth quarter quite well, but could not answer back offensively, as they fell in the match up.

The underclassmen have big shoes to fill, but again, their efforts should not be taken away. Each member of the team has contributed to many yardage gains in every game this season.

White said the ultimate goal of this season was to bring home a CIF championship, which would be the first in the school's history.

"To bring a CIF championship for the school and our fine community would have been the last piece to this season, and it does hurt falling a little short, but I think it has been a tremendous season," White said. "Finishing 9 – 2 is definitely something to hang our hat on and play off of.

With a short word on what will be of next season, work, more work, and Coach White is "looking forward to it."

Full story in the Nov. 15 issue of the Borrego Sun.