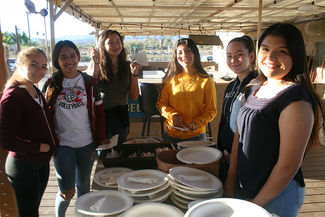 Legion members put in a lot of hours to help raise funds for the Lady Rams volleyball team, which totaled over $1,400, according to coach Rick Rethoret.

About 200 patrons, mostly via purchasing tickets in advance at $7 each, will be happy to see the money used wisely by our girls volleyball team – uniforms, equipment, and tournament expenses.

The breakfast of pancakes with butter, syrup, sausage, eggs, coffee, and juice were delicious and filling.

Overseeing the operation was Legion Commander Rick Dobbins, with his crew of Dale Jones, Ed Cate, Tim Kight, Kenny Mickelson, and Bob Scribner either preppin' or mixin' or cookin' or fixin' in or out of the kitchen. Also assisting in the efforts was newly elected Borrego Water District Board Director Gina Moran, and State Park ranger Carina Hammang.

When entering the parking lot of the American Legion Post 853, one could not help but notice how good "The Beast looked."

It's that 1944 Scout Car having sat for eight years in disrepair, but now brought back to life – brakes, clutch, carburetor, cooling system, and what looks like a wash and wax – just in time to enhance the color guard entry in the Parade.

According to Legion member Bob Scribner, Tito Molina (Tito's Auto Care) worked tirelessly through the summer to get The Beast ready. "People at the parade loved it," he said.

Kudos to the Legion for supporting the community, and I gave a nod to The Beast on the way out of the parking lot in appreciation of community members like Tito who lend their tireless support to the Legion.