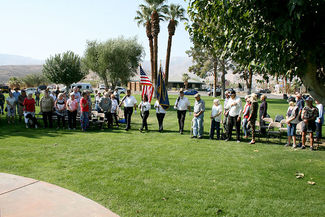 On the 100th anniversary of the Armistice that signaled the end of World War I on Nov. 11, 1918, over a hundred Borrego veterans and family members gathered on Veterans Day to pay tribute to those who have served in our armed forces.

With American Legion Post #853 Commander Rick Dobbins as emcee, his members first presented the Colors, and then Judy Taylor on guitar sang the National Anthem, all folks present joining in. Dale Jones said the opening and closing prayers.

Dobbins expressed continuing concern over PTSD-related afflictions by veterans, and the fact that we're losing the last of WW-II veterans every year. He also made special mention of our Borrego Days Parade VIP Henry DuBay, 95 years old, a highly decorated transport pilot during D-Day above the beaches at Normandy and elsewhere.

Taylor also sang a wonderful rendition of "America the Beautiful," plus her own song written for last year's Veterans Day event, "This is America to Me." 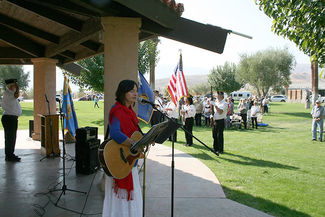 Marine Corps veteran Robert Owen gave memorable and very informative remarks on how vets can take advantage of Medicare Part B and Supplemental insurance ($400/yr for both) to cover a wide range of medical procedures.

He spent an unnecessary five years trying to get a hip replacement with his existing Part-A coverage only, with the Veterans Administration continuing to supply him with pain medication instead of the procedure. He's now well on his way to recovery thanks to those additional insurance options.

The hour-long ceremony ended with the traditional 21-gun salute, and was followed by Tim Kight on bugle playing a memorable rendition of Taps.