The Great Debate: Desmond vs. Gomez 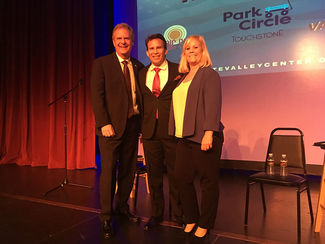 While Borregan officials and volunteers had proper focus on the opening of the Borrego Days Parade the following morning, the two candidates running for District 5 County Supervisor – Republican Jim Desmond and Democrat Michelle Gomez – focused their attentions on fielding debate questions on the night of Oct. 19 at the Maxine Theatre in Valley Center.

If anyone expected political fireworks, they came away sorely disappointed. Neither choked, or got tongue-tied; in fact, both were articulate and informative about their positions.

Desmond and Gomez were also civil and respectful with each other, and they focused on giving answers specific to the questions asked by debate moderator William Del Pilar. There were no questions allowed from the audience.

On a variety of local and County-wide issues raised – transportation and infrastructure, local park services, and housing, as examples - solutions offered by the candidates were more a matter of focus than whether or not the problem exists. While there were no references to "Borrego-specific" issues, the debate format did provide a feel for the style and character of both candidates and the leadership they might provide.

Jim Desmond, current Mayor of San Marcos, is a fiscal conservative with an easy-going manner, and has a logical, find-what-works-best bent to him. He is an active pilot for Delta Airlines, disciplined and focused on the best way to do, or plan for, whatever job needs doing.

Michelle Gomez is a legislative analysis who reviews legislation, and drafts and executes public policy. A bit more formal in style and delivery in comparison with Desmond, Gomez comes across as very self-assured - in her analyst background, in community service, and with advocacy organizations, for example serving as San Diego County Commissioner on the Status of Women and Girls.

On one question involving the substantial take-over fee of a local park donated to the County, Gomez suggested the County waive the fee, while Desmond preferred a closer look at purchasing the park outright by the County.

On the issue of marijuana, Desmond goes along with the law's provisions that leave permitting decisions to local authorities, while Gomez feels that medical and even recreational decisions outweigh the need for even local government intrusion.

On the subject of our General Plan, Gomez sees opportunities for "tweaks" and changes, possibly adding amendments "that make sense."

Desmond is cognizant of the many years it takes for housing and other development projects to take shape, so where such projects are supported by the community and necessary infrastructure, consideration for approval should proceed. Desmond points to the "over-regulation" of building a home, while Gomez focused on the need to include affordable housing in new housing development projects.

The five County supervisors operate on a $5 billion yearly budget. Included within the general budget are "reserve" funds amounting to about $700 million per year.

How do we use or not use those funds? Gomez wants to use enough so that residents suffering and dying from Hepatitis-A get proper treatment and services; no one in the 5th district should go hungry; and for those living in or near urban areas, affordable housing and public transportation need to be available to get to and from work.

Desmond then responded gently and with a respectful smile, "I have a different opinion." He showed by his calculation that $700 million provides "realistically only 30 days of reserves," potentially insufficient given a severe and widespread County disaster.

Desmond got off the best line of the debate when comparing the use of County cash reserves to his job as the pilot of a fully-loaded jetliner having to make critical landing decisions over land and water based on fuel on board at the time: "I never used more fuel than I had onboard when I landed." Gotta think about that one a moment, but it was Mr. Fiscal Responsibility at his best.

Each candidate gave the Maxine Theatre audience of about fifty potential voters (and those streaming online) a good showing of competence to hold office, but under two different management styles.

Good luck to both Jim Desmond and Michelle Gomez in the final days of the campaign.

And remember, it's been 24 years since Borregans first voted Bill Horn to be our County supervisor. So be sure and vote on (or by) November 6 and make your voice heard on who will represent Borrego Springs for at least the next four years.