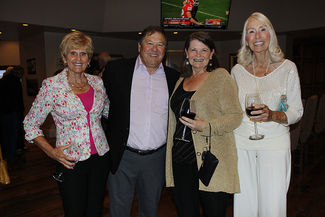 After their summer hiatus, the Rams Hill Golf Club is open and ready to get the season started. Their buffet and dance party kicked the season off in style, as both members and non-members were invited to the event Nov. 3.

With great music playing by Inland Empire's best, Big Truth Band, many guests danced most of the night away.

The new dining room, the Rose room, was finally open, after undergoing a major face lift.

The new furniture and style of the room gives it a more modern and calm soothing vibe with booth-like seating, hard wood gray tables, and candle fixtures at the center.

This modern environment was enhanced by the spectacular view of the golf course.

Among the guests who made their appearance at the event was Bill Berkley, Chamber of Commerce executive director Linda Haddock, accompanied by Sandra Mikovich, as well as resort neighbor La Casa Del Zorro general manager Patrick Sampson.

Going into his second season as the general manager, Harry Turner said, "I'm ready. I've been ready, let's get another great season going."