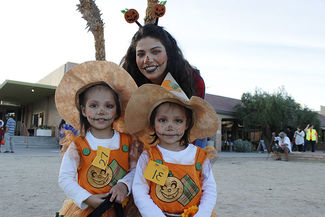 We may be a small town, but the uniqueness of Borregan Halloween costumes at the library Oct. 31 revealed a quality-over-quantity focus, and we match up well against those big-city dwellers.

Children and adults alike began with servings of shaved ice, shaped by Larry Gilstrap and colored by assistant Angelica Garcia.

Pumpkins were painted, and children received treats from tailgaters in the parking lot like Honorary Mayor Andy Macuga and wife Polly, and the ladies of Coldwell Banker, who were dressed as witches. The Pirates of the Salton Sea made a welcome appearance following their Borrego Days Parade win for Best in Show. Aargh!

From adorable to ghoulish, children vied for titles, including Scariest and Most Original, with both traditional and unique entries in the mix.

Emcee Sherrilynn Polanco had the participants circle the patio, and Judge Sonja McGrath made her selections: Paco won for scariest dressed as death, and Maddyson dressed as a princess took the title for Original costume. They didn't have an award for Most Adorable, but McGrath surely would have given that, hands down, to twins Arianna and Brianna Bojorquez, who were dressed as adorable scarecrows; little Jaylanie in her jester-like attire was a close second.

Fred Jee kept folks on schedule, and 2018 – 19 Miss Borrego Dennise Cecena and her Court were on hand with a basket toss game; and head librarian Tonya Gadbois worked throughout the afternoon and evening event to make things ran more smoothly.

A long list of Friends of the Library volunteers also contributed to the success, including Robin Johnson, Cristina Arias, Viviana Hernandez, and Eleanor & Delbert Degenhardt.

To round out the evening, and by tradition, hundreds of children around the Valley showed up at the RoadRunner Club, where they were not exactly forced to accept a ton of candy and treats from residents.