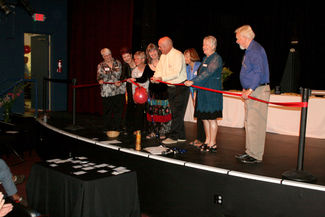 A nearly full house of Borrego Springs Performing Arts Center patrons sat comfortably in the theatre Nov. 17 and experienced a toe-tapping, season opening Gala performance by Judy Taylor and her Wild Oats All Girl Band doing C&W, Cajun, and even a little Rock--and-Roll. The fingers of featured guest performer Sue Palmer, "The Queen of Boogie Woogie," danced miraculously over the ivories in several memorable solo riffs.

The night before, many of those same BSPAC patrons attended an event to thank the many who contributed to the theatre's successful 'Buy a Seat,' initiative. Patrons saw their names engraved onto brass plates on the armrests of brand new seats. Dick Helvig, President of the BSPAC Board, welcomed all, giving special thanks to Judy Coyle, Honoree for 2018 – 19 for her 23 years of unparalleled BSPAC service, and also thanked his other supporting Board members for helping to get the new season underway.

The BSPAC theatre has 177 seats, but 198 were actually "sold." Doing the math doesn't account for the difference, because some generous seat purchasers turned in extra seats for re-sale, with all proceeds going to BSPAC. The project took many months to complete, with General Contractor Rick Anson of Anson Construction doing a complete reconfiguration of the concrete floors during our mid-summer heat and humidity. The Borrego Valley Endowment Fund contributed funds for the new sound system, and our County Board of Supervisors pitched in funds, as well.

When previous ticket purchases were added into the mix, the renovation was a great success. Helvig narrated a time-lapse video showing just how much work went into the construction and renovation.

Performing at the Gala the next evening, Judy Taylor and her band kept the audiences fingers and toes tapping the night away. Taylor began with her signature six-guns twirling amidst holstering/re-holstering, and moved into her nifty rope tricks; later, both the "Loo-zi-anna 'gator stew" and food-addiction-for-the-sake-of-love pieces were very funny. April West wowed the crowd with her trombone (she also plays guitar, Bass fiddle, and assists on vocals), and Sharon Sufflet wailed on drums (and also as a vocalist). But it was Leah Kelly who gave the most heartfelt (and audience-appreciated) performance with her rendition of Willie Nelson's "Crazy" (for lovin' you).

A season pass is $200, and a four performance pass is $90 (a $10 savings!). So come out and check out our newly refurbished theatre, and enjoy a performance while you're at it.