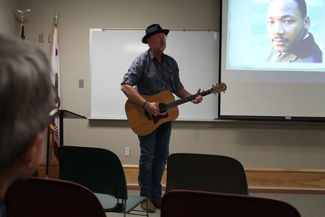 Southwestern College Professor and Musician Peter Bolland made a guest appearance at the Julian Library Oct. 27 for his one book event.

Bolland shared a talk to a small group in attendance on the history of peaceful protests, and how to do it, and what not to do, from his new book, "March, Book 1."

He played and sang several songs by Bob Dylan, and songs he has written, including Marty and Coretta. His talk also referred to Henry David Thoreau, Gandhi, and Martin Luther King among others, with Bolland's motto being, "There are many ways to resolve differences without using violence."

It was well-presented, and enjoyed by all that attended.

Bolland also writes a column for Unity Magazine and another column for the San Diego Troubadour. He serves as executive editor and writer on Inside the Beltway.com.

He is also a philosophy and humanities professor and department chair at Southwestern College in Chula Vista.