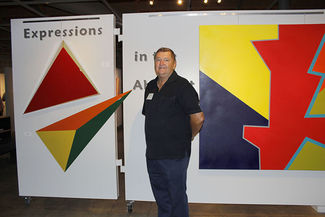 A show that slightly mimicked the well-known Broad Museum in Los Angeles, the Borrego Art Institute put on its own version with "Expression in the Abstract." This show was full of color and life, guests were welcomed to view all the different types of artwork hanging on its walls.

After being one of the best shows last season, it was brought back for another, and did not disappoint, as one guest said, "What a great show, beautiful pieces full of simplicity and texture."

The exhibition showcased selected artworks by the five artists, who made pieces specifically for the show.

There were paintings that depicted architecture, landscape, bright colors, and others were a combination of materials.

Artist Gerald Patrick, whose steel artwork welcomed guests as soon as they walked into the show. Patrick's inspiration, he said, is what speaks to him. He is a big fan of bright colors.

"As cliché as it is, but it's light a light bulb goes off in my imagination when I see something I'd like to recreate," Patrick said.

Nicholas Foschi's artwork depicted architecture, mainly bridges. Foschi was one of the artists to create little pieces specifically for this show.

Kim Chasen, who makes her return for the second year, showcased her mixed artworks. Unlike the other four artists, Chasen's focus was depth and texture.

The show will be open until Dec. 2.

Full story in the Nov. 15 issue of the Borrego Sun.