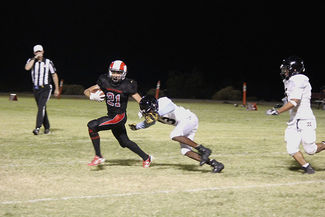 It was another battle won by the Borrego Springs Rams football team.

The Rams continued their dominant performance, and handled business on homecoming night Sept. 28 with a 50 – 36 win over the Victory Christian Academy Knights.

The team broke through in the second half, scoring 38 points to top the Knights, handing them their first league loss.

"I knew it was going to be a battle," head coach Tim White said, as he paused with a long sigh. "These guys were undefeated in the league for a reason."

The team sits in second place in the league standings with St. Joseph Academy at first.

The game started off a bit rocky in the first half against Victory Christian, who was on the board first, 8 – 0.

The Rams answered back a few minutes later, but still trailed by two, after a blocked extra-point.

What stirred things up a bit more was the kickoff return run by the Lions, who ran big. Junior wide receiver and defensive back Jalen Wilson ran for 80 yards, no one could stop him. Once again, the Lions attempted a two-point conversion, but were stopped short at the one.

The Lions started the second quarter right where they left off, and extended their lead against the Rams, after a quarterback keeper by senior Larry Oldham III on fourth down. But the two-point conversion was yet again stopped short, 20 – 6.

With 22 seconds left in the half, senior wide receiver and defensive back Alexys Padilla ran for 16 yards on second down, after a touchdown through the middle by senior offensive and defensive lineman Lucas "The Bus Morales" was called back from a holding penalty.

It is to be noted that in several plays prior, Morales drove down the middle for respectable yardage to get the Rams to great field position.

Then the Rams attempt at a two-point conversion was no good, as they trailed the Lions, 20 – 12, heading into halftime.

"We started the first half playing a key defense, kind of like a bracket type of defense, and I think we did a decent job," White said. "Then went back to our regular sets, mixed it up a little bit that caused them some trouble and I think we just need to come out stronger."

The Rams had possession of the ball at the start of the third quarter, and in no time, found the end zone, after a pitch through the middle to senior running back and linebacker Juan Carmona, who ran for 27 yards. The Rams could not get a two-point conversion, and were down just two, 20 – 18.

The defense did its work, and made way for the offense to get back on the field.

Carmona again, had a big gain on a 25-yard run to put the Rams at the Victory Christian 24-yard line for the first down.

Padilla then ran for a few yards before being pushed out of bounds and a personal foul by the Lions pushed the Rams to first down on the 8-yard line.

Then Padilla easily ran in for the Rams' touchdown, and the two-point conversion drive down the middle by Morales put the Rams up, 26 – 20.

The Lions managed to get down the field, and with a few what seemed to be questionable calls, they were in the red zone. Then a pass by the quarterback went high, as Padilla attempted to pick it off, but right in the end zone was senior wide receiver, defensive back and kicker Manuel Fuerte for the interception. Right place and time.

The Rams pushed down the field, getting to the 10-yard line. Then it was the end of the third, but it was a great place to start the fourth quarter.

The ball was handed to Morales, who pushed down the middle for a gain of five, Rams were at 1st and goal at the 5-yard line.

Back-to-back drives, the Rams were stopped short, bringing a 3rd and goal. But with great teamwork, a quarterback keeper by senior Fernando Alcaraz, and a big push by Morales helped the Rams across that goal line. The two-point conversion was successful, pushing the Rams' lead, 34 – 20, with 9:38 left in the game.

The Lions were not letting the Rams have it easy, as they answered right back with a touchdown and two-point conversion of their own, cutting the Rams' lead to 34 – 28.

Then with less than four minutes left to go, the Rams and Lions each scored and went for the two-point conversion, 42 – 36.

The Rams again had a chance to score, after a 22-yard run by Padilla, who put the Rams at the 19-yard line. Then a quarterback keeper to the 2-yard line, but he was stopped short.

Alcaraz was taken out of the game after what could possibly be a dislocation of his elbow. This paper was printed prior to the final word of the injury.

What looked to be an awkward tackle, as the Victory Christian player landed on Alcaraz's arm as he was trying to stretch for the goal line.

"It's bittersweet. My thoughts and prayers are with Ferny (Alcaraz) and his family, and whenever a kid leaves a game and has to go to the hospital, it's scary. I'm hoping he is OK, because we do need him down the stretch," White said. "He's a great leader and athlete, and we'd hate to lose him."

Junior quarterback and lineman Ty White came in for Alcaraz.

Carmona ran in for the touchdown, and the two-point conversion was successful, and the Rams extended their lead, 50 – 36.

The Rams managed to hold the Lions, and get the win to improve to 2 – 0 in the league.

"We made some good adjustments on our defense. Gave them some trouble on their fronts and different blitz's, but it mainly it was trying to control the ball on offense and eat that clock up once we got the lead, and don't look back and I think the kids did a great job finishing the game as usual," White said.

The team will have their first road test in over a month and a half, as they face the Horizon Prep Lions Friday Oct. 5. The game is at 3:30 p.m., the Rams' first day game in almost two years.

Their next and last home game of the regular season is at 7 p.m. against Ocean View Christian Friday Oct. 19.

Already mid-way through the season, White said it is still a long journey ahead.

"We're sticking to one game at a time. We have another league opponent coming up. We don't have any breaks, no bye weeks this year, so it's just going to be one hard fought battle after the next," White said.

"It's tough when you're picked to win league because everyone's gunning for you, and bringing you the best on Friday night against you to try to stop you."