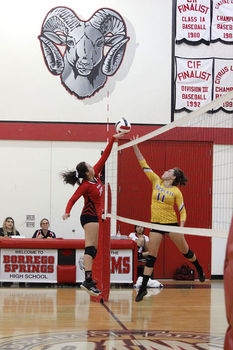 The Lady Rams were on a roll, playing well and psychologically ready for a match-up against the best team in the Southern Manzanita League, the West Shore Lady Wildcats Sept. 26.

However, the Lady Rams had their win streak snapped, after dropping three straight sets, 3 – 0. This was also the Lady Rams' first loss at home.

Observing practice drills before the start of the game, the Lady Rams were up for a challenge against some fearless power-hitters, who seemed no less than impressive in drills – receiving, setting, and hitting.

The Lady Rams were without their fine receiver, digger, and setter, junior and captain Danielle Del Bono, who was out with a foot injury. Luckily, the injury is only sidelining her for a week and a half.

The first set, the Lady Rams just didn't have it and could not bounce back from what the Lady Wildcats continued to serve them, dropping the set, 25 –4.

The second set, the Lady Rams seemed to be a bit more alive, taking the lead a little early, but were not able to hold it. Little mistakes took over and the Lady Wildcats continued to dominate every which way they could. Kills by senior outside hitter Camila Hernandez helped with the rallies. Not to forget the contributed sets from senior Ana Fuentes. The team made West Shores work for the win, however, but even that wasn't enough, as the team fell, 25 – 11.

The third set, the team was back on the chopping block, and could not get those points, falling 25 – 8. One of the most exciting parts was Hernandez going head-to-head with West Shores' senior Alyssa Williams. Back-to-back sets, blocks and tips, until Hernandez finally won the tip for Borrego.

It wasn't easy. It was a disappointment for sure, with great serving and pinpoint accuracy on power shots from the Lady Wildcats in stark contrast to the Lady Rams unforced errors.

Coach Rick Rethoret put it succinctly: "We played against one of the finest small public schools ever."

The team face each other again for the last game of the season at West Shores, and hopefully, there is a different outcome.

The Lady Rams will be back in action in a conference match at home Thursday Oct. 4 against the Calipatria Hornets at 4 p.m. This will be their last home game of the season, as they will be away for the remaining four.