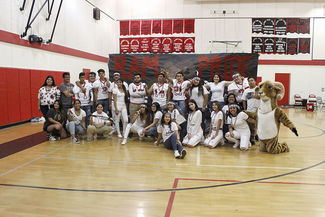 The lifelong tradition of homecoming found its way to our little town of Borrego Springs, and the high schoolers continued the celebrations Sept. 27.

Associated Student Body president Gabriela Rocha started the night off by welcoming everyone to the pep rally. The 2018 – 19 football and volleyball teams were introduced, followed by a round of musical chairs for each team. Seniors Fernando Alcaraz and Jennifer Rodriguez were the victors for the competition.

The fun continued with a friendly pie eating competition. Two contestants from each class participated, with an exception for the junior class where a middle schooler was recruited. Participants dove in face first into the pies, but slow and steady proved to win the race. Senior lineman Lucas Morales took home the win – "The Bus" as many call him.

Back-to-back challenges – pudding feeding and telephone lifesaver took teamwork and a lot of strength to not laugh. The sophomore class took both of those competitions.

Following this was the chants between each class. The senior class and sophomore class once again were head-to-head, but it was the sophomores who were the loudest, by .1, coming in at 5.9 over the seniors' 5.8. Close, but not enough.

Each class then presented their posters, which were all creative and well-done.

The winner would be the poster that the football team would run through prior to the start of the homecoming game. AGAIN, it was the seniors and sophomores, but being upperclassmen, seniors had the advantage. Not to mention, they were loud. Very loud.

Then it was time for the bonfire; the football team ignited the pallets of wood. The planned blaze was overseen by the Borrego Springs Fire Protection District. On each side, firemen had a hose ready in case of unnecessary flames spreading on the surrounding brush.

The team ran around the pallets, described by many as something in Lord of the Flies.

About 15 minutes later, flames engulfed the pallets, and the bigger it got, the hotter it was, as many backed away toward the parking lot.

The next night following the homecoming game against Victory Christian, the dance was held in the quad.

Many of the students took over the dance floor, as they danced the night away with their friends, continuing to make high school memories.

The homecoming traditions live on.