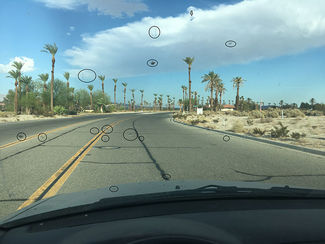 In what is surely one of the most kudos-worthy long-term weather forecasting feats in Borrego Springs history, the people and technology at AccuWeather combined to make an accurate rainfall prediction that defied historical constraints and logic.

On page 8 of the Sept. 6 issue of the Borrego Sun, I wrote an article, "Weather Forecast for September," and noted the unusual data in AccuWeather's long-range forecasting. First, a dip in the daily high temp for Sept. 20 to below 100-F, followed by two consecutive days that showed "0.04 inches" of precipitation. Nothing before, nothing after. Just those two isolated days showing a miniscule amount of rain; a few days later, the Sept. 21 – 22 forecast was revised, pushing back precipitation by a week – a coming thunderstorm that was said to be dumping all of 0.2 inches the week of Sept. 24 – 28.

Those two numbers, 0.04 inches on two consecutive days, at least to my experience, was a highly speculative and detailed forecast 30 days out, coming as it did where no rain was predicted to fall for weeks before Sept. 20. The data seemed literally out of the blue, naked and isolated, perhaps even an error, and I promised our readers an explanation if the prediction actually panned out.

Remarkably, the prediction held, and I now humbly bow and scrape before our prescient and all-powerful weather overlord, Marshall Moss, AccuWeather meteorologist and VP of Forecasting Operations. He and his team have accomplished nothing short of a weather prediction miracle in Borrego Springs, while simultaneously putting the prognosticating groundhog, Punxsutawney Phil, to permanent shame.

The break in more than 100 consecutive days of daily high temperatures exceeding 100-F came, as predicted by AccuWeather, on Sept. 20. Then in the early morning hours of Sept. 21, I went outside and found myself staring at rain clouds hugging the middle- to upper-reaches of the San Jacinto Mountains, with the entire valley covered by spotty cumulous clouds. The air was thick with moisture, feeling as if it had just rained, or was about to.

Unfortunately for data hounds, every weather station in Borrego Springs (except 0.02 inches reported atop Montezuma Grade in Culp Valley) showed absolutely no precipitation for Sept. 20 – 22. Nada. Zip. Flatlined at zero. I needed proof in Borrego Springs

But wait, I did have objective proof. That same morning, Sun editor Jolene Nacapuy was surprised to see sprinkles on her windshield while driving to work, even if only for a few seconds.

She was not carrying an official rain gauge, but it was no illusion, although anecdotal in nature that she also had to turn on her windshield wipers.

Later that afternoon, I had a similar experience while driving out to the Borrego Springs Resort to cover a story. Again, anecdotal evidence.

I had stopped and taken interior photos of my windshield, showing the water droplets against the exterior landscape and sky on the drive out to The Resort. Plus I had back-up anecdotal testimony from Jolene from that morning.

Photographic evidence, backed up by anecdotal reports are good enough for me to say, at a confidence level of 100%, that ultra-light and sporadic precipitation did occur, confirming a long-range forecast by AccuWeather.

So, how did AccuWeather do that so far in advance, and so accurate as to time and amount?

Let's start with AccuWeather's not-so-basic tools of the trade: Access to the most powerful weather-predicting systems in the world by a speed factor of 10,000 relative to a modern desktop computer (we're talking petaflops here, folks); patented forecasting models; historical patterns that give a general view of local conditions; and the latest satellite technology combined with local and regional data, surface mapping for high and low pressure, cold and warm fronts, cloud cover, wind, and for us Borregans especially, precipitation.

There is a proud history of accuracy here by AccuWeather, and I would be remiss to omit it. Moss pointed out for the edification of our readers a recent analysis undertaken of 95 million forecasts from six weather providers in 1,140 locations around the world over the three-year period ending Dec. 31, 2017.

Full story in the Oct. 4 issue of the Borrego Sun.