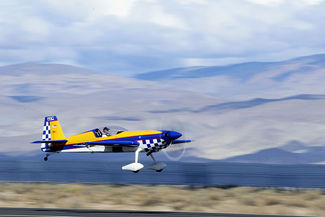 Most folks like to know they do something well. But for a select few stunt pilots in aerobatic competition, in particular, doing one thing extremely well that is at once dangerous and both physically and psychologically challenging is part and parcel of their personal strive for excellence. That high level of achievement was revealed in Hammerhead Akrofest 2018, held at the County airport from Oct. 12 – 13.

It was not a typical "air show," except for the final day of competition. The 17 pilots from the Hammerhead Aerobatic Club of San Diego competed in four skill levels – Primary, Sportsman, Intermediate, and Unlimited – Chief Judge Michael Church and his assistant judges tallied the points solely on the basis of execution during a set of precision maneuvers where even the slightest wobble visible to the judges cost dearly. The contest comprised not only two routines that were "known" to and practiced by the pilots, but also one routine "unknown" up until the night before the contest.

For the Akrofest competition, three flights were scored for each competitor – Known, Unknown, and Freestyle – plus an overall winner. Jim Bourke won the overall medal in the Unlimited category, plus he won the Known, Unknown, and Free categories; Stephen de la Cruz won overall Intermediate; Susan Bell won for Sportsman and also all three of the other categories; and Chris Harrison won for Primary.

The aerobatic finale Saturday Oct. 13. It was a multiple-wow experience. Set against a backdrop of white cumulous clouds both overhead and draping the Santa Rosa Mountains to the north, three of the finest stunt pilots in America put on a jaw-dropping contest for an appreciative crowd during the Four-Minute Freestyle finale.

An awards ceremony featured emcee, Akrofest director, and Intermediate category pilot Pawel "Paul" Miko handing out medals and plaques, thanking the pilots and attending wives for making the Hammerheads a great institution in the San Diego area. Michael Church then auctioned off a flight suit, a special seat harness, and even an "airplane on a stick" (used for demo purposes and painted to the colors of one's plane) to help fill the Hammerheads coffers.

Akrofest has become a special event in Borrego, and the Hammerheads its stars. It's clear these aviators have a special bond, and they help each other to be better pilots using both their level of experience and lending support. And we groundlings here in Borrego Springs have come to enjoy their performances, and look forward to next spring for Hammerheads-Akrofest 2019.

Full story in the Oct. 18 issue of the Borrego Sun.