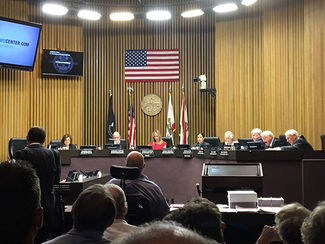 It also rejected the so-called "compromise" solution, recommended by the County Planning Commission in June, which would have put residential lots on top of the relic sand dune that runs through the property. The vote means the zoning for Rudyville will remain semi-rural, as it has been since the General Plan Update in 2011.

In the weeks leading up to the hearing, the Tubb Canyon Desert Conservancy's (TCDC) ran a campaign on social media –Borrego Knows Best! (www.borregoknowsbest.org). More than 33,000 voters in San Diego County viewed the Borrego Knows Best! video, more than 1,500 individuals signed the petition that was delivered to each of the supervisors, and dozens RSVP'd to attend the hearing.

On the morning of the hearing Borregans packed the chamber of the Board of Supervisors and overflowed into a second room. More than 100 people opposed to Rudyville traveled to San Diego for the hearing – some aboard the TCDC sponsored "Rudyville Express," some cutting short vacations or postponing business obligations and traveling from distant parts of the state. Many who attended the hearing had to watch the proceedings on closed circuit TV in the overflow room because there were no more seats available in the chamber.

The Supervisors completed their preliminary business and considered four other Property Specific Requests before getting to the Rudyville. Chair Gaspar asked the speakers for the presentation organized by TCDC to begin the public comments. Maris Brancheau, Mark Jorgensen, Rob Staehle, Betsy Knaak, and David Garmon provided opening comments.

Over the course of nearly an hour and a half a stream of Borregans laid out their rationale for retaining the current zoning on Rudyville, and repeatedly asked the Supervisors to state specific reasons if they disagreed with the conclusions being presented.

Only one person spoke in favor of upzoning Rudyville – one of the owners, Chris Brown, the former Land Use staffer for Supervisor Horn. He addressed the Supervisors with familiarity, saying that he was not addressing them in his "usual capacity as a hired gun," but as someone with "skin in the game" because he was an owner of the parcel in question. Brown trotted out his usual arguments – the zoning change in 2011 wasn't fair, he was being treated unfairly by county staff, he had spent a lot of money on this investment, and the down zoning of his property by the General Plan Update was an example of an illegal process known as "spot zoning – all of which had been refuted in the TCDC presentation.

Toward the end of his presentation, Mr. Brown suggested that perhaps he could reach a compromise with the community and place a cap on the number of lots he would be allowed to create on the parcel. He floated the number 145 lots, to which the heretofore appropriately silent audience broke into spontaneous laughter.

Upon conclusion of public testimony, it was Supervisor Horn's turn to speak. He began by railing at county staff for putting the 34 lots proposed in the Alternative Map in the flood plain: "I've been out there. I've walked that parcel. You can't put housing in a flood plain."

Staff politely informed the Supervisor that he was misinterpreting the map, and that the section he thought was in the flood plain was actually outside of it, and vice versa. It was a Rosanne Rosannadanna moment.

Supervisor Horn's next tack was to move that Rudyville be referred back to staff for "further study" and that perhaps it could be voted on in December. His motion was seconded by Chair Gaspar, but languished for lack of additional support.

At this moment, Supervisor Jacob spoke. She praised the in depth analysis provided by county staff that recommended denying the Rudyville request. She described her deep understanding of east county communities grappling with water issues, and she opined that the facts of Borrego's water situation would be no different in December. So there was no point in waiting until December to decide on Rudyville. She likened Brown's investment in Rudyville to investing in the stock market: sometimes you make money and sometimes you lose money. Finally, she took up Brown's theme of fairness. She said that fairness to investors is an important consideration, but that the Supervisors must also consider what is fair to the people who live in Borrego.

At the conclusion of her remarks, Supervisor Jacob asked that Supervisor Horn's motion be withdrawn and replaced with her motion to accept staff's recommendation to leave the zoning on Rudyville unchanged. Her motion was accepted by the Board and passed by a vote of 3 – 2. The two dissenting votes were Supervisors Horn and Gaspar.

Several moments of stunned silence passed before the audience could grasp that Borrego Springs had just won the Battle of Rudyville.