Fall Season Begins at the Fair 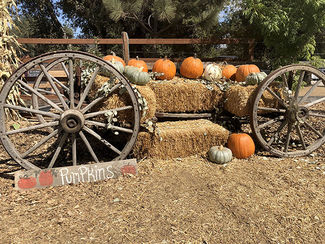 What a great way to kick off the fall season by enjoying a day in the backcountry at the Julian Country Fair Sept. 22.

At the 25-acre Julian Farm and Orchard, visitors enjoyed the multiple festivities offered at this free event. The weather cooperated nicely to contribute to the day, with the weather at a steady 78 degrees, sun beaming down, and a slight breeze to top it off. Not quite fall weather, but close enough, right?

Waving hello and circling the farm were those taking a spin on the tractor-pulling trailer hay rides. For families, a grassy area was designated for sack races and plastic egg tosses. What turned out to be one of the biggest hits for kids were the pony rides, many lined up to pick out which of the six pony's they wanted to ride.

There were 20 rows of berries ready to be picked. Families went up-and-down with little green baskets, as children went up-and-under the leaves to pick the best red berries. Tart, sweet, or sour, berries were picked until baskets were full.

Next to the rows of berries, an area was taken over by orange and white pumpkins. The pumpkin patch was a great success, as many took home more than one. The pumpkins were small to extremely large, which people had difficulty carrying.

A board at the front of the patch showed the cost of the pumpkin – the smallest being $2 and the biggest $10.

I took home a $2 pumpkin. It took a while to find, going through the patch at least three times, but definitely worth it.

If you missed the fair, and wanted to visit the pumpkin patch, don't worry. The farm will be open on the weekends until Halloween.

So if you're looking for somewhere close to visit a pumpkin patch for the season, or if you want to take your picturesque photo for the fall season, I'd visit the backcountry of Julian.