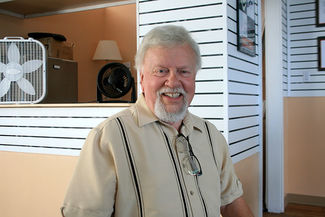 George Keith has been on a talent hunt, so as Artistic Director at the Performing Arts Center, he looks not only for the right players for the parts in three upcoming performances, but also wants to ensure that anyone wanting a chance to perform gets that chance.

"We want to make a place for anyone who wants to participate," Keith says, "solo or in the chorus." The incomparable Elaine Hazelrigg will also serve as assistant producer.

Julian resident and actor Marty Emory showed up for the final audition on Saturday, Oct. 6, and there is no doubt that with his dramatic skills, British accent, and willingness to work with other actors on their various accent-dependent roles, he's a shoe in; Director Keith stopped Emory in the middle of his reading to tell him he had a role in Mousetrap.

With several auditions earlier this season behind him, Keith is now pretty much set as far as three productions he will be directing: The Christmas Show, The Mousetrap, and Nunsense the MegaMusical.