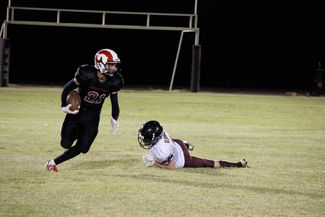 What a game. If you weren't at the Borrego Springs High School football field Sept. 7, you missed out on quite a thriller between the Rams and crosstown rivals the Julian Eagles.

The clock began to wind down from five seconds, no timeouts left for either team, the Eagles were inside the 5-yard line on fourth and goal, ready to take the win away from the Rams. Then in a blink of an eye, it was celebration on the sidelines. The Rams had stopped the Eagles short to seal the win.

"It was gut check time. The kids stepped up and were able to execute the defensive plays I called," head coach Tim White said. "They were tremendous out there to make those stops."

A sweet victory against crosstown rivals, pushing the Rams to 3 – 0 on the season.

"I don't know if I could pick a word to describe this feeling, but it was amazing," White said, being a bit speechless before answering. "The kids have overcome adversity in every game so far. The first game injuries and trying to fight through, then battle through a game last week with a fight, losing one of our captains, to coming out here, and doing what they did is, wow."

White also credited the Eagles, making the Rams really fight for the win.

"They played a heck of a game, and super proud of them over there. They challenged my players at the goal line in a game of inches," he said. "I told the team, this is the difference between winning a championship and not winning a championship, and they responded. I couldn't be more proud."

Coming from a year off from playing football, White said he wasn't sure what to expect from this team. "They are a really good team, and they've been putting it on people," White said about facing the Royal Knights when asked before the game.

The Rams scored a whopping 48 points, but the Royal Knights bested them with 60, ending the Rams three-game winning streak.

The Royal Knights were on the board first, 8 – 0 in the first quarter. The Rams answered back in the second with 16 points of their own. However, the Royal Knights added 24 points.

The second half went back-and-forth, but the Royal Knights prevailed in the end.

Rams senior quarterback and defensive back Fernando Alcaraz led with four touchdowns on 12 carries for 54 yards.

Senior wide receiver and defensive back Alexys Padilla and senior running back and linebacker Juan Carmona followed with 131 and 108 yards, respectively.

The team currently sits at second place in the Citrus (8-man) League football standings with a 3 – 1 record overall, and begin league play this week against the Rock Academy Warriors.

Against Julian, Borrego found themselves down early in the game.

Eagles junior running back and wide receiver Bradley Kaltenhaler carried the ball down the middle for about 6-yards, taking along five Borrego defenders with him for a touchdown. A two-point conversion on a quarterback keeper by senior Shane Cranfield put the Eagles on the board first with 7:44 on the clock in the first quarter of the game.

The Rams attempted to answer right back, as Padilla took a punt return for a big 70-yard gain before being taken out at the Eagles 30-yard line. Unfortunately, a penalty pushed them back to their own 15-yard line.

Alcaraz's pass intended for Padilla was deflected and bounced right off his chest, and Eagles senior safety Reece Elmblad was in the right place at the right time, and snagged the ball before being taken down midfield midway through the first quarter.

Borrego pushed Julian back, forcing the third and long, but a personal foul hurt the Rams, giving the Eagles that 1st-and-10 on the 15-yard line. The Eagles converted that chance for yet another touchdown. They attempted another two-point conversion, but were stopped short. Julian still led Borrego, 14 – 0.

The team stepped it up in the second quarter with minor changes. Instead of kicking it up a notch, White said he told them the total opposite.

"I told them to calm down because they were too keyed up with too much emotion instead of focusing on the game," White said. "Football is a fickle game. You think it's a smash mouth violent game, but we do our thinking in the huddle. We can't be out here making emotional decisions because we made bad ones, so we tried to separate the emotion from the decision making till we made good ones, and once we calmed down, we played our game."

The second quarter was all Borrego on offense and defense.

Alcaraz pitched the ball to Padilla who ran for over 80 yards to help Borrego get on the board. The extra point was no good, and Julian was up, 14 – 6 with 8:55 on the clock.

Then it was crunch time, as Julian had possession of the ball with less than a minute left. Both teams used their timeouts to stop the clock, and prepare for what was to come.

The Eagles were in the red zone with a chance to win the game that was a matter of time, timeouts and very important strategizing.

With fourth and about two to go, Julian pushed to get the first down. It looked as if the game was over, but the team did not give up. Again, the Rams held the Eagles, forcing the fourth and goal. However, instead of going for a field goal, which would have given them the win, the Eagles decided to go for the touchdown.

Rams junior linebacker and quarterback Ty White blew up the hole, and junior tight end and defensive lineman Andres Reyes, Carmona, and Padilla were off the edge to stop them inches short.

Game over, the Rams pulled off the win.

The Rams hit the field again at 7 p.m. Sept. 21 against the Rock Academy Warriors at home to begin Citrus League play.

Full story in the Sept. 20 issue of the Borrego Sun.