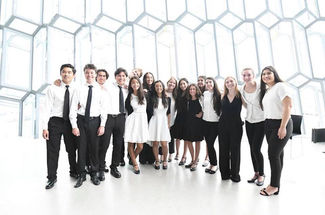 15 singers, a part of Chamber Bravura and one student photographer, accompanied by chaperones, including Borrego Springs High School principal Katherine Girvin, visited the coveted country of Iceland from June 28 to July 5.

Girvin has been the director of the Chamber since 2009.

Many of the members in Chamber Bravura have traveled across the country and have sung in Italy, Germany, Austria, Ireland, England, Wales, Prague, Australia and New Zealand.

For Borregan Dennise Cecena, her first time flying was to New York earlier this year with the Chamber, and traveling to a different country was another experience she has got to fulfill. Alongside Cecena was Camila Hernandez, both becoming seniors this upcoming school year, accompanied her as the Chamber's official student photographer.

Hernandez was given the opportunity to go, thanks to the wonderful and generous hearts of the Borrego Springs community.

Cecena stated in a previous interview that she has learned many things from her new choir family. She said she has "learned to work as a part of a team, how to fuel my passions with the help of others, how to support those around me instead of solely taking self interest, and how to spread love and joy to others in the community through (singing). I have acquired a tremendous work ethic from it that has made a huge positive impact on my academics."

In March of this year, on behalf of La Casa del Zorro, general manager Patrick Sampson donated $500 to Cecena's Iceland fund to help her get there. Then with the generous contributions from the community and the Rotary, they helped make this dream possible.

With the amazing experience, Girvin noted one of the many highlights of the trip. She said performing the national anthem on July 4 in Hallgrimskirkja definitely took the cake of the trip.

"We performed our typical Latin sacred material, and broke in to the national anthem at the end, and many were in tears," Girvin said. "It's nice to see that the kids' music touches souls."

They also performed in a couple of church services, and various locations –Catholic Mass in the Cathedral of Christ the King, at a Lutheran service in a church on the countryside, in front of waterfalls, Lava Center, a museum that outlines the history of volcanoes in Iceland, and in Harpa Concert Hall, their new state of the art concert hall in the center of Reykjavik.

Like many travel experiences, there will always be some type of problems, whether it is lost luggage, missed flights or just bad seating arrangements. For Chamber Bravura, said by Girvin, the only challenge was their hotel accommodations at one point.

"We were placed in a hostel type hotel, and 11 teenaged girls were sharing one bathroom," Girvin said. "That wasn't happening. But the chaperones and I quickly made sure that they only suffered through that one night."

When Chamber Bravura was not singing and enchanting their audience, they visited a multitude of waterfalls, beaches, glaciers and geysers.

"The landscape was beautiful," Girvin said. "I think all the kids agreed that everywhere we went literally took our breath away."

Chamber Bravura, a 501(c)(3), is an extracurricular vocal performance organization composed of vocalists from various middle and high schools in the San Diego County. They sing solely a Capella music, which can be rigorous and challenging, and have been invited all over the world to perform in many highly regarded venues.