The Bugs are Back 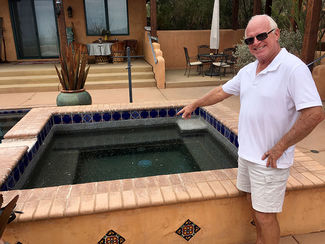 If your pool/spa plaster is painted with a dark color – black or blue – or you drive a dark colored car, the Water Boatman bugs have probably left their mark already. It's not on par with the "irruption" last year, but the year isn't over yet.

Lifted and carried aloft with the winds blowing west from the Salton Sea, the tiny Water Boatmen look for water, and in the water are the algae upon which they feed. From the sky, water looks dark, and so do many cars. The bugs also prefer warm temperatures, and the entire month of August looks to be just that.

Last year, Water Boatmen covered Borrego pools in thick blankets, and skimmers and filters became quickly and repeatedly clogged, and pools had to be drained. Borrego Pool Supply owner Clint Bradin, who has been in the pool business for 13 years in Borrego, went out on 62 calls within a two-day period last year, saying, "It's been a nightmare."

Water Boatmen, so named because of their oar-like legs, grow up to only half an inch in length. But with thousands of them descending at one time, small size is more than made up for with quantity.

The solution for a mild Boatman "irruption" problem in one's pool/spa involves a very precise chemical balance, Brandin said. "It's a mixture of algaecide and chlorine," he said.

Algaecides are effective against the Boatmen, but they also neutralize chlorine, so the mix has to be exact. "

People shouldn't try this method on their own," warned Brandin, adding that pool/spa owners should also not apply soap. The soap makes a thin film on the top of the water, and the Boatmen can't get through the barrier for breathable air.

"Some people use so much soap," Brandin said, "that it looks like a bubble-bath."

Better to leave Water Boatman eradication methods, on scales both large and small, to the pros.