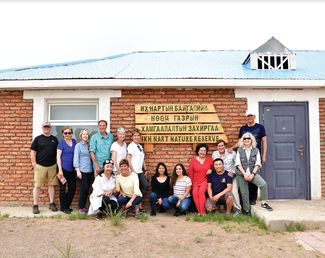 The bus rocked and rolled and jiggled its passengers out of their seats as it made its way across the Gobi Desert in Mongolia following a seemingly nonexistent road for 50 miles. Aboard were the three Borregans, two Australians and 14 San Diegans (really 13 as one traveler lives in Mexico).The scene was reminiscent of Genghis Khan and Marco Polo movies with herds of horses galloping across the steppes with their manes glistening in the sun, as well as sheep and cows so numerous that the bus had to honk and slow down constantly as they crossed our path. Camels grazed languidly in the distance. Goats, with horns so long they can scratch their rumps, gazed at us from a neighboring hillside. Eagles soared overhead. We were stunned with the natural beauty.

We were headed to Red Rock Ger Camp in the Ikh Nart Nature Reserve, an expansive and breathtaking park with a 10 year partnership with our own Anza Borrego Desert State Park. No one on board could imagine that at the end of this long journey to the middle of "nowhere" would appear a park with ger (yurt) sleeping and dining arrangements – not to mention a small but smart collection of California red wines! But there it was in the distance, a neat row of gers lined up as smartly as a row of pearly white teeth with two outhouses nearby. As our bus pulled up and we spilled out, a rustic wagon pulled up to carry our luggage – driven by two very beautiful camels. We became friends immediately with these gorgeous beasts with their own natural eye makeup. Who decided to bless camels with such lovely eye liner and mascara?

Our gers were elegant beyond description. Elaborate felt covers lay like art projects on our beds, and brightly colored enamel paint shone from the furniture and walls. A small Solar powered light lit our way as we prepared for dinner in the "dining" ger. Showers were only upon request, and then a camp host would need to start a fire to heat up the shower water in another location. We opted for a wipey bath.

Meat, meat, and more meat are the food groups in Mongolia! Yes, there is salad with tomatoes and cucumbers, but really all those herds we witnessed running across the steppes are the mainstay of these hardy people. One such hardy Mongolian, Ranger Batbold, sat down next to me at the dinner table. Affectionately nicknamed "The Beast", he was all smiles and gestures as neither of us spoke the other's language. Through an interpreter, we shared stories about two of our favorite people, Ranger "Big Mark" (Jorgensen) and Ranger Steve (Bier) , from Anza Borrego Desert State Park.

Animated and appreciative, Ranger Batbold explained how the partnership with these two parks and the numerous visits of rangers and scientists to Ikh Nart (reciprocated by Ikh Nart Rangers coming to ABDSP) over the past 10 years have had a profound effect on the survival and viability of their gorgeous nature reserve, including protecting their Argail sheep. His affection and deep appreciation for Big Mark (Jorgensen) and the work he began and which continues to flourish in Ikh Nart were tangible. Our conversation only scratched the surface of the list of projects this long-lasting and highly successful partnership has accomplished. I was a proud Borregan when I was able to call Ranger Big Mark my good friend.

The conversation inevitably turned to our beloved mutual friend, Ranger Steve, now deceased. Ranger Batbold's eyes teared up while sharing stories about Ranger Steve's many training sessions for the park rangers as well as the manuals he produced for the park. Ranger Steve's first aid training was stand-up comedy and highly effective at that. Anyone who knew Ranger Steve could imagine his zany antics as he used ketchup for blood and acted out accidents with painful facial contortions and writhing on the ground. With no knowledge of the Mongolian language, Ranger Steve aptly and successfully trained the Ikh Nart Nature Reserve Rangers in first aid. Ranger Steve understood the power of humor and with his uncanny ability to relate to all people and to communicate in human gestures, smiles and kindness, he became the teacher extraordinaire.

They loved Ranger Steve and in Ranger Batbold's words, "Ranger Steve was a great man and we will always remember and appreciate his contributions to Ikh Nart". At the Park Headquarters at Dalanjargalan, a memorial space for Ranger Steve is in the making. It will include copies of the numerous handbooks and manuals he produced as well as the creation of a new award for Ikh Nart Rangers, the Ranger Steve Park Interpreter Award. Nothing would please Ranger Steve more than this. Interpreting nature and sharing this with his fellow humans were his love.

As Ranger Batbold and I ate our watermelon dessert, I inquired as to their greatest need at this time. He responded immediately with a request for more motorcycles in order to patrol the boundaries of this expansive park. The first motorcycles were purchased a few years back through the intervention of Ranger Big Mark and his life-long study and protection of Big Horn and Argali sheep. Today only one motorcycle is still in use. The rough terrain has taken the life out of the others, and parts are extremely difficult to come by. Poachers are a real challenge and the motorcycles allow them to protect the endangered Argali sheep.

After a peaceful sleep in the ger with a light rain falling all night, our camels and cart valet were waiting to load our luggage back into the bus. As we said our warm good-byes, word began to spread that Ranger Batbold and others needed more motorcycles in order to continue the important work they were doing. There was a sudden burst of philanthropy from our bus with one lovely traveler, Chinyey Hostler, donating for one motorcycle followed by a flurry of additional checks and cash. Ranger Batbold was beaming as we shared that we would be sending Ikh Nart Nature Reserve over $2,000 in order to purchase two more motorcycles!

It was a moment to honor and to be a part of the work of our own local Anza Borrego Desert State Park Rangers and volunteers and their years of service to this beautiful park and gracious and hard working people. It was also a poignant reminder that although our dear friend Ranger Steve is gone, his legacy lives on as we continue the partnership with the Ikh Nart Nature Reserve, a place and people he loved.