Dodging a Weather Bullet Waiting for the Dog Years of August 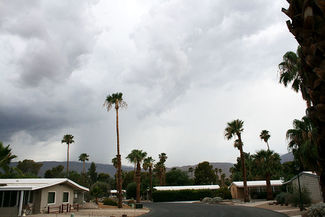 Around 2 p.m. Thursday July 12, there were mild thunderclaps off to the southwest above the San Jacinto Mts., but there was also a lot of cloud cover over the desert and mountains, so neither a thunderhead nor any lightning strikes were visible. However, a rainfall band was visible below the cloud cover and looked to be headed for Borrego. Rain, oh glorious rain, bring it on.

On the AccuWeather website, unseen was the altitude of the two heavy rain cells. The satellite radar images do not show a vertical profile of the weather system, but rather a bird's eye view looking straight down through it. Regardless, there were definitely two very strong cells hovering over the mountains at unknown altitude and bearing down on Borrego.

A heavy and steady downpour above Coyote Canyon and others heading east (down-canyon) can cause serious flash flooding. Meteorologists at AccuWeather saw what was developing, and the warnings went out on TV and cell phones. A short video forecast suggested we'd be hit pretty much dead center by the two strongest cells 90 minutes later, around 3:30.

And then 30 minutes later, around 2:30, nothing. Zip. Nada. It was over. The system diverted towards Ocotillo Wells to the southeast. No rain here, no lightning and thunder, no flash flooding. Patches of blue sky? Yes. We had just dodged a serious weather bullet.

How did that system fall apart so quickly? It's all in the minute-by-minute details of the developing thunderstorm, and even the most sophisticated software running on the fastest weather supercomputers is hard-pressed to keep up.

The moisture-laden air rises over the San Jacinto's when it's pushed up by drier desert air. As it rises, it cools and condenses and falls as rain. But also air masses separate up in the clouds with regard to positive and negatively charged ions. If the system is strong enough to form a thunderhead, and if there is enough separation between the ions (think of a battery) to initiate discharge (lightning), and if the temperature and atmospheric pressure are favorable, then conditions are ripe for a major downpour and flash flooding.

Somehow, wind shear or wind direction changes or temperature/pressure shifts (or a host of other factors) came into play very quickly. They combined to change the dynamics of the entire system within minutes and thus altered the thunderstorm's path. We were lucky this time, but the inherent danger in such a quickly changing system is precisely the reason for having up-to-the minute forecasting.

So, with this type of weather activity in mind, how do the dog days of August look? Looking back to five years of data (2014-2017), daily high temps suggest above 100-F will be with us most of the month. The one "trend" is that for the past five August's, daily high temps have generally risen starting mid-month; prepare for temps between 110-120. And the Dew Point numbers are right on the cusp of swamp cooler vs. air conditioner use and efficiency.

And as for August rain, we received a smattering in early August of 2014 and 2017, but nothing in the intervening years.

If, however, moisture enters the area during periods of high temperatures, keep your eyes on the skies and your ears on alert for flash flood warning signals.