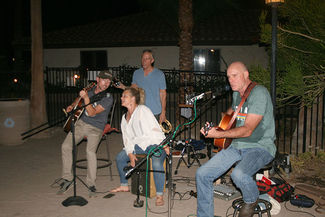 It's been quite a month of July, what with the heat wave and all, but then again we had a good mix of Saturday night music "poolside" at La Casa del Zorro to get us through the doldrums. Lucky Tongue rocked on July 14 (see July 26 issue), followed by local rhythm and blues band Bree Jones on July 21, and ended with another local, country favorite Trevor McSpadden on July 28.

Bree Jones – A great local group together for three years now and playing in Borrego about once a month out of Santa Ysabel, the Bree Jones Band is oh-so easy on the ears. That's due in large part to lead singer Donn Bree, his resonant baritone voice with its exceptional range filling the night air with original rhythm and folk/blues compositions.

While the original songs are terrific, it takes listening to their rendition of BB King's "The Thrill is Gone" to realize just how good this band really is.

Trevor McSpadden – It was way too hot to play outside on the evening of July 28, so McSpadden strummed his guitar and sang inside the Fox Den. Used to playing at Carlee's, McSpadden used the gig at LCDZ to make a little joke as he was singing his country/western tunes for a dozen or so upscale patrons having dinner.

"I'm not used to such a sophisticated audience," he said, feigning embarrassment.

They got it. It was typical C&W music, the lone wolf theme mixed with love at first sight and love gained and lost.

His vocal purity is amazing. And despite the audience chatting and eating during the songs, when McSpadden finished up a given piece, they all broke out in unified and very appreciative applause and cheers.