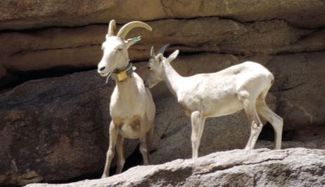 While it would be technically cor- rect to say the June 29 to July 1 weekend temperatures for the 48th annual census of our Ovis Canadensis (Peninsular Bighorn Sheep) were "cooler" than in the previous four counts, the 79 coun- ters themselves at 19 remote loca- tions within the 1,000-square mile Anza-Borrego State Park would probably say "less-hot," averaging "only" 100 degrees-F. If the count had been held the weekend after Independence Day, they would have had to admit "hotter." They got "less-hot lucky" by 10-15 degrees.

The 2018 count is in – 225 total – and there were 18 more total sheep counted than in 2017, due mostly to more Ewes, more male and female Yearlings, and more sheep with no discernible ID (too far away or dis- appeared quickly); last year showed the lowest total count in five years at 207.

A bit of good news also seems to come via a comparison of aver- ages over five years for Ewes and Yearlings (male and female). It shows this year's numbers pretty much on the nose with respect to five-year averages for those sheep categories. Sheep counted this year with "No ID" provided were six above the 5-year average.

For Palm Canyon, the most pop- ular with hikers, the five count sites showed that while sheep cat- egory numbers between sites had changed, only four fewer sheep overall were counted this year over last (76 vs. 80).

Sheep do move around a lot. One of the ways of looking at the population is by ratio of one sheep cat- egory to another: Ram to Ewe and Lamb to Ewe ratios were down this year (both the lowest in five years), while the Yearling to Ewe ratio was up over last year to a 4-year high this year. The Lamb count dropped by nine over last year, but the combined male and female yearling count was up by eight this year. We'll have to wait to hear what the experts have to say on sorting out significant differences or trends, if any.

It should be noted that the "aver- aged numbers" over five years are skewed (to the under-count side) due mostly to the total absence of sheep at Rattlesnake Canyon in 2017 (except one counted on the way up to the site). The watering hole was bone dry last summer, perhaps due to seismic shifts in the underlying rock along the fault zone, according to former ABDSP Superintendent Kathy Dice.

As far as overall health of the population, Dr. Ester Rubin, sheep counter and Research Branch Chief at the Arizona Game and Fish Dept., says the sheep look well overall, with no outward signs of significant disease or infestation. Sheep counters returned in good spirits on Sunday afternoon, welcomed to the tallying area by hiking guru, fitness expert, and repeat count organizer Mike Puzzo. The counters all brought back water samples, as they first did last year, for testing Total Dissolved Solids in water at the various sites, a citizen research project overseen by hydro- geologist and multi-year sheep counter John Peterson. Another counter, Stephanie Sullivan, had a good outing up at the 1st Grove of Palm Canyon: "I didn't want to come back," she said.

Perhaps the lack of oppressive heat was responsible. In any case, she will be back next year, as will most if not all of the other citizen- science counters. They love their work.

One final note: There was exactly one solitary Ram counted in 2014, but none since, at the official count site (and map-designated) "Sheep Canyon," a feeder halfway up Coyote Canyon.

If the trend continues, "appropri- ate sheep authorities" might con- sider a memo to mapping interests the world over of a name change to "One-Sheep Canyon." Just sayin'.