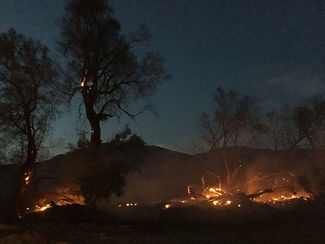 A fire broke out on Seley Ranch along a treeline in northwestern Borrego Valley this afternoon. Borrego Springs Fire District Chief John Hardcastle says it was perhaps due to a downed power line that ignited thick brush under a long line of trees, and that some of the flames along the affected several hundred yard section had reached tree-top level. The Borrego fire crew, together with a CalFire crew and bulldozer, got to the scene quickly for fire suppression, and Hardcastle's crew will remain overnight to prevent flare-ups. The CalFire crew was already scheduled to head up to Idyllwild to help contain the 5,000-acre brushfire (now called the Cranston Fire) that also broke out today. It has yet to be contained at any level and 600 homes are currently in jeopardy.

A CalFire crew member, based on reports he received from Idyllwild, said that an arson suspect is in custody, after an Idyllwild citizen spotted and followed the man setting a series of fires that, because of high heat and strong winds, quickly turned serious. The arson suspect was found by authorities to be in possession of accelerants commonly used to start fires.