RAW and RAAM: Racing From Oceanside to Durango to Annapolis 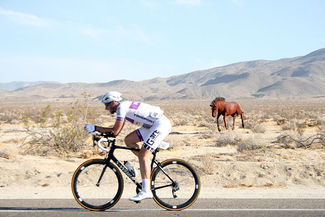 While Borregans were working or golfing or shopping or sleeping from June 12 through June 24, 95 cyclists in the Race Across the West (RAW) and Race Across America (RAAM) had started in Oceanside and passed through Borrego Springs, the first official time station at 88 miles inland.

The RAW cyclists were on their way to the finish line at Durango Colorado (928 miles – now completed); however, for the RAAM racers, many are several days away as of this writing to end their trek in Annapolis, Maryland (3,067 miles).

In the two events, solo racers plus 2-, 4-, and 8-person teams competed in 27 categories and four age groups. All passed through Borrego Springs and many were welcomed by crowds near Christmas Circle.

It was a blistering hot afternoon on June 12, 108-degrees in the shade, but the racers weren't in the shade, they were in the sun! It felt like 120-degrees standing at the foot of the Montezuma Grade when Gerry Steinberg (RAW #R128, 50-59 age group) was the first soloist to enter Borrego Springs and the first to exit. He finished the race in second place, 54 minutes behind Dany Boneville (R207), who won the 50-59 RAW Solo category with a total elapsed time of 3 days, 13 hours, 45 minutes.

The two events are scheduled around the Summer Solstice (June 21) so as to provide the maximum amount of daylight for the racers, but the RAAM trek also includes a total elevation climb of 175,000 feet. RAAM soloist Christoph Strasser (#377, Under-50 category) managed to make the most of the time he had – day and night – stopping/resting for only about 12 hours the entire time. He finished his 3,067-mile trek to Annapolis in 8 days, 1 hour, 23 minutes, ahead of the next closest cyclist by more than a day when he finished. It's Strasser's 5th win in 8 years (tying the record of the late Jure Robič of Slovenia), a truly amazing series of performances over nearly a decade in the toughest bicycle race ever invented by mankind. Strasser still holds the RAAM record for total elapsed time, set back in 2014 – 7 days, 15 hours, 56 minutes - with an average speed of 16.42 miles per hour over 3,020 miles. The man is a machine, and it's almost a given he will be back next year to break his and Robič's record of 5 wins.

The Race Across America began in 1982 under the name "The Great American Bike Race" as a by-invitation-only event with four racers. It was organized by renowned cyclist John Marino. Both RAW and RAAM have since held regular qualifying events every year in Borrego Springs. On a personal note, this reporter and Marino went to school together from 1st thru 12th grade, Marino being the Hollywood High School quarterback and yours truly a wide receiver. He was good on the football field and even better as a cyclist, finishing that first "Bike Race" 36 years ago in 12 days, 7 hours, 37 minutes (Santa Monica to New York City). Marino's been a RAAM organizer ever since. Unfortunately, he couldn't be reached for comment before we went to press.

Several Borregans said of the racers who put themselves through this ordeal: "They're nuts!"

However, for the racers and support teams, there are at least several, perhaps many reasons men and women put themselves through such rigors as are involved with RAM and RAAM. Some say for fun, although cycling through Borrego and across the desert in 120-degree heat sounds anything but; others say it's the competition – pitting oneself against a field of the best riders in the world; and still others, Christoph Strasser perhaps included, are going for records. But when all is said and done, that man also has to love competing and is probably having fun while he's at it.

There was one RAW entrant interviewed that rode not for records or competition or fun, but rather, specifically, to raise money for a worthy charity: Team Rotary RAAMs Polio (T416). The 4-person team has a true international make-up, and says racer Bob McKenzie, it's is all about eradicating polio from this planet at the earliest possible moment.

McKenzie starting riding a road bike in August, 2011 to ride for Rotary's "Ride to End Polio" in El Tour de Tucson in Tucson, Arizona. In the five years he has ridden in El Tour, he has raised over $400,000 for Rotary's Polio eradication effort. McKenzie was run over by a motorcycle in 2011 and, at the hospital, he was worried about his bicycle. He is the team's oldest rider and newest to the sport of cycling.

Kurt Matzler is a management professor at the Free University of Bozen in Italy, and a member of the Rotary Club Goldenes Dachl in Innsbruck, Austria; Bob joined the Rotary Club of Tulsa in 1994. He has served as chairman of many of their committees including the Henry P. Iba Citizen Athlete Awards. He served as President of the club in 2010-11 and has been an assistant governor for his Rotary district #6110.

Full story in the June 28 issue of the Borrego Sun.