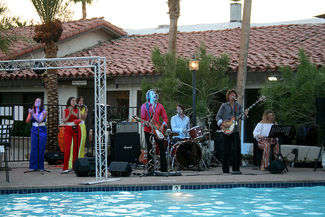 It was already a warm and sultry night here in Borrego Saturday, July 14, but that didn't prevent the Rock 'n' Roll band "Lucky Tongue" from bringing even more heat, although they did it via their musical stylings and engaging presence in a one-night (and free) "poolside" performance at La Casa del Zorro. More than 50 hotel guests and Borregans were in attendance, hosted by LCDZ general manager Patrick Sampson. "It's Borrego Springs' favorite Rock 'n' Roll band returning to their old home!" he said.

Fresh off a 24-performance tour of England – all in the month of June! – it was pretty amazing to see and hear that Lucky Tongue's lead vocalist/bassist Blaine Ward could, without much of a break since returning stateside, still belt out lyrics all night long. The man's a machine. He covered songs from the 60's onward, plus some original works. One of his two sons in the band, Blade, belted out "Born on the Bayou" like he was well-rested, too. Blaine's kids are a large part of his well-oiled musical machine. They've now done 1,000 performances in their seven years together.

Yes, it's a family thing, with sons Blade and Dylan on rhythm guitar and drums, respectively, plus daughter Gillian (all singing fine back-up vocals). Gillian confessed to joining the band "Because we were going to England!" There are worse reasons.

In their La Casa performance, one of their first songs, "Cup of Sunshine," is an original by Blaine written as a substitute nursery rhyme for his daughter.

Another song with a special meaning to Blaine was "California Dreamin'" by The Mama's and The Papa's that was "inspired from a dream of a world with no wars and where no one was hungry." And that theme is what helped inspire Blaine to bring to life the band's 2-hour full-on production, My Generation. Also playing an important role in the My Generation concept was Joni Mitchell's 1970 post-Woodstock song by the same name that hit a nerve with Blaine: "We are stardust, we are garden." Blaine also used Hawaii's long-standing ecology themes and traditions to create his new show. "The Hawaiian people had long figured that out way before us," he said.

My Generation had a very successful preview (and very positive critical review) in the Ward family's now-home state of Hawaii, and Blaine hopes My Generation will be making its way to large stateside venues soon. The concept is simple: Tell a compelling story using songs, images, and memories spanning decades of similar, well-connected themes from the mid-60's to the present – the philosophy of love, peace, and a reverence for Mother Earth. Today's Green Movement had its roots in the '60's, and its branches have grown throughout the decades, the similar-themed music growing and flourishing along with it.

The story Blaine told, both in speaking to the LCDZ audience and with his music, included three of the four regular Go-Go girls – Gillian with Marlena and Sabrina Jeffery in various costumes - plus classically trained Linnea Minbiole on her electric cello. The musical energy surrounding Blaine's story was a thing to behold.

Lucky Tongue not only gave a lively and engaging performance, but also gave a foreshadowing of what the production of "My Generation" will be like. When it comes to within driving distance of Borrego, count me in for a ticket to THAT performance!

LCDZ has a summer "Music by the Pool" performance every Saturday night from 7 p.m. – 10 p.m. (no cover), with country-themed Trevor McSpadden on July 28 and Crossroads Acoustic on Aug 18. Call ahead for confirmation of performers and times at (760) 767-0100.