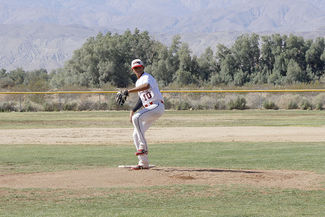 The last home game for the Rams baseball team didn't go the way they had hoped, but it was nothing less of a job well done.

The teams bats weren't connecting with pitches and fell short, 18 – 3 in five innings to the Calipatria Hornets May 17.

"I'm proud of the guys. No one quit all season," head coach Marc Meadors said. "We had a couple of key injuries, a couple of players deciding not to play, and we had to move a bunch of guys into positions they're not used to playing, and it took a while to get that, but it worked out eventually."

With the loss, the team falls a little below the cut off for the CIF playoffs, but Meadors hopes the team will get there next year.

Marking the last home game of the season, the team loses two seniors this year – Miguel Barron and Luis Arias.

The Hornets were on the board early in the top of the first inning. After an easy ground out to the lead-off batter, a trio of hits from the 2-3-4 hitters brought in one run.

The hits continued and the Hornets were up 5 – 0.

The Rams answered back with a run of their own, after hits from senior left fielder Luis Arias and junior pitcher Juan Carmona to get on base.

Junior Victor Arias hit a single in the gap and brought in a run, 5 – 1. But that's all the Rams would get until the bottom of the fourth inning.

The Rams switched pitchers to begin the top of the second, but again, it was a rough one, even with the change.

The Hornets continued their hot bat streak with multiple hits, and brought in four more runs to extend their lead, 9 – 1.

Carmona managed to get through his first 1-2-3 inning in the top of the third, as things seemed to lighten up for the Rams.

But the Rams could not lift the ball into the outfield.

With the Hornets leading 15 – 1 in the fourth, the Rams had to find a game plan, and fast.

After a strikeout, the Rams were patient at the plate and had two runners on base with back-to-back walks.

Barron flared a single down right field, bringing in a run, 15 – 2.

Then a risky, yet successful bunt, brought in another, 15 – 3. Though, that's all they would get.

The Hornets brought in three more in the fifth and the Rams went down in order in the bottom of the fifth, ending the game due to the mercy rule.

It definitely wasn't the way they wanted to end their last home game, but Meadors said he couldn't be more proud of the team and their efforts.

"We worked hard everyday, in games and at practice. They were dedicated from the very beginning," Meadors said. "I have to hand it to these guys for putting the effort they did."