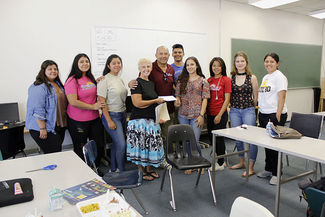 Even as the school year comes to an end, the extension of donation and generousity by the Borrego Springs Interact Club doesn't.

The Club presented Ernie Loza, long-time resident and head of the Slab City Ministries, with a $2,000 check, which will be used to fund the project of building bathrooms in an orphanage in Mexicali this summer.

"I really appreciate the kind donation you have given me," Ernie Loza said to a few of the members of the Interact Club. "These kids will certainly appreciate what you are doing for them. This is a huge gesture, so thank you."

The current bathroom situation at the orphange is not ideal, and needs updating.

There is just one bathroom, located in the girls dorm. So when the boys need to take a shower, the girls have to stop, drop what they are doing and leave the room until the boys are done.

The ground work has already been laid out. It will only take two weeks, maybe even less to complete.

Some of the funds that were donated were raised from the Tamale Dinner, held at the RoadRunner Club April 27, which helped support three different programs. One includes the bathroom project.

"The students raised around $1,000, and then it was matched by an anonymous donor," Lorry Seagrim, interact club coordinator said.

The Interact Club is always looking for projects to help, not just in the Borrego community. Seagrim paid a visit to the orphanage and brought it up to the club, and members unanimously chose to help support the project.

"They have a big heart, they're good kids, and always looking out for others," Debbie Loza said.

Ernie Loza told the students about the children at the orphanage, who have been in and out of orphanage's and not really fitting in because they felt abandoned and without a future.

"It's been hard for them, and we really try to make things better, one step at a time," he said.

Ernie and Debbie Loza continously donate their time whenever and wherever they can. Their hearts are always full of love, so it is nice for the Interact Club to support their efforts.