April – May Students of the Month 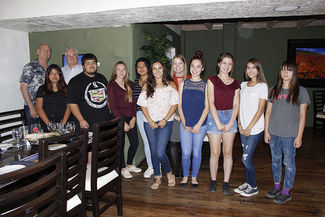 It was a busy April and May for the 'Students of the Month' as they enjoyed a wonderful lunch with their principal at Rams Hill and La Casa del Zorro, respectively.

The April 'Students of the Month' for the middle school – Mariana Torres, Jacob Marsh, Melanie Magdaleno and Carol Alvarez and high school – Aide Valdez and Diana Arias had lunch with principal Katherine Girvin at Rams Hill.

The middle schoolers felt that eating lunch with Girvin was a bit weird, but at the same time felt that it was nice and fancy.

Although they are still in middle school, they want to pursue their higher education, but are still unsure of where. Mariana and Melanie want to be vets. Jacob, on the other hand, hopes to attend UCLA and pursue a degree in mechanics.

The high schoolers went to lunch the following day with Girvin, and had a nice lunch and chat with COO and general manager Harry Turner and thought it was a nice gesture.

The May 'Students of the Month' were a much bigger group, as a couple of the students were unable to attend due to other commitments.

All loved to eat lunch with her, and ordered off of the new Fox Bistro menu, which they had a hard time deciding.

A couple of the students said it was interesting and a new experience, while others said they felt comfortable to eat lunch with her.

After ordering, general manager Patrick Sampson stopped by and congratulated the students for a job well-done, as well as the seniors for working hard and wishes them all the best in their future endeavors.

Sampson gifted the students gold fox pins and a hat.

The April and May 'Students of the Month' were surely treated with delicious lunches at these establishments.