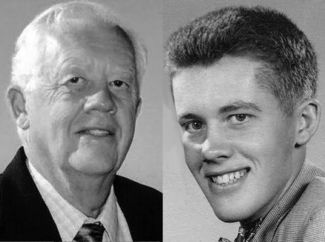 Alan was the oldest son of the late Frederick Adolph (Jake) and Grace Wyatt Schuler, and husband to Donna Mack Schuler.

Alan was born in Warren, Pennsylvania July 1, 1929. A 1947 Warren High School graduate, he was a third generation Warren Countian. He received his bachelor's degree in Business Administration from Washington and Jefferson College, Class of 1951. Alan obtained his Master's degree in Mechanical Engineering from Rensselaer Polytechnic Institute in 1959.

Alan married Donna Ann Mack (also of Warren) on May 11, 1950. Together, they raised two daughters, Sherri Schuler Lightner and Bonni Schuler Cogan, first living near Warren where Sherri was born, then moving to Meadville where Bonni was born. Soon after, the family moved to East Hartford, CT, where Alan worked for Pratt & Whitney, while attending Rensselaer Polytechnic Institute.

Upon Alan's graduation from RPI in 1959, they moved to San Diego when Alan accepted an engineering position at General Dynamics Astronautics, working on the Atlas-Centaur.

While in San Diego, he taught courses in rocket propulsion at the local community college and formed a small business, Cal Con, to provide additional income for his family.

The two-year assignment turned into 13, during which time he traveled on business to Norway, Algeria, Indonesia, Singapore and Japan. After the launch of the last LNG Tanker, he returned to San Diego to work for the Space Systems Division.

Here, Alan and Donna built their first custom home in Scripps Ranch to be close to their children and four grandchildren, doing much of the interior finish work themselves. During his professional career, Alan and Donna toured the world, visiting Mexico, Canada, Hawaii, Australia, England, Scotland, France, the Netherlands, Norway and Sweden. In 1993, he retired after 35 years with General Dynamics.

After retirement, Alan became one of the first members of the Scripps-Mira Mesa Retired Senior Volunteer Patrol, receiving his 20-year pin in 2014. Alan also served as Treasurer of the Alan and Donna Schuler Family Foundation (founded in 1997) until he was recently elected to be President.

Alan loved camping, sailing, off-roading, fishing and hunting. He was an inveterate community volunteer. When the girls were in secondary school, the local Boy Scout Troop had no leader, so he became the leader, although he had no sons.

Through General Dynamics, he and the girls took the Coast Guard training for boating and joined GD's sailing club. Many Sunday's were spent on San Diego Bay.

This led to the creation of a dune buggy for desert runs and his modification of a pristine Corvair he planned to enter in the Baja 1000. The move to Quincy ended the planned race of the Corvair.

After returning to San Diego in 1985, Alan was a founding member of the Y.B.D.B. Club, a group that dry camped and went off-roading in the desert, mostly in the Anza-Borrego area. It was his passion for the desert that led to the purchase of property in the area and the decision for Alan and Donna to build a second home in 2008 in the small, bustling, active, and welcoming community of Borrego Springs. Again, Alan and Donna did much of the interior work themselves.

They loved traveling around the United States in their Airstream trailer or motor home, either with an Airstream caravan or on their own to Pennsylvania to visit friends and family.

He is also survived by his grandchildren Dawna Leanne Chuss (husband Brian) and John Wyatt Lightner (wife Cynthia) of San Diego and Evlyn Ann Lightner Baez (husband Emmanuel) of Tacoma, WA, his brother Richard W. Schuler (wife Jeane) of DeLand, FL, his nephew Mark Schuler (wife Tammy, children Connor and Kaitryn) and his niece Deanna Bennett (husband Samuel, children Micah and Kristen). Additionally, he is survived by his Swedish "daughter" Viveka Kjellgren (husband Per Arne) of Westport, CT and their children, Victor (wife Leah) of Poway, CA and Alex (Chantel) of Seaside, CA. Alan was predeceased by his beloved wife of 65 years, his grandson Mack Davis Lightner, and his parents.

Alan, as did his wife, donated his body for medical research at the University of California, San Diego Medical School. The family suggests a donation to a charity of the donor's choice. A memorial is planned for this summer.