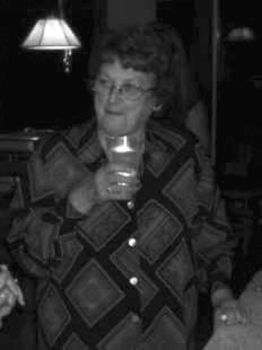 Agnes was a vibrant, talented out-going lady that loved to dance and be social, and she enjoyed Life to the fullest! She was loved by many, near and far, and that love will forever live on.

She is survived by her children – Tandra, Greg, Paul and their spouses, and grandchildren Robbie, Halo and Garrett.

Her oldest son, Allen Bushman, was deceased in 2009.

Agnes was raised in Ranchita, married, and moved, then returned in 1980 and built a home with husband Bushie.

Unfortunately, Bushie passed away in 1982.

Agnes continued living on her ranch. She also opened her fabric and yarn shop in Borrego Springs, called "The Yarn and Yardage."

But after two location changes, it became "On Pins and Needles." The last location was next to Carmelita's in The Mall.

She sold yardage, yarn, and jewelry beading supplies, took in dry cleaning that traveled to Ramona Cleaners every week, did professional clothing alterations, and gave classes in sewing, knitting. crochet, and beading. She was so skillful and talented!

In between shop keeping she also managed to work at The Décor Shoppe, and at La Casa del Zorro as a hostess. After she sold her shop, she had time on her hands and decided to take up a new skill.

She worked at Borrego Springs Resort for many years as a Bartender and Hostess. She so enjoyed being around her people and serving them. Her customers and co-workers became good friends.

Agnes sold her ranch in 2014, and moved to Borrego Springs.

She continued doing professional clothing alterations and became passionate about her new skill, creating greeting cards. They were not just cards, but works of art. Just beautiful!

Agnes had her own style and love for life and she gladly shared it with all. She had a life well-lived. She left us too soon and she will be dearly missed by many family and friends alike.