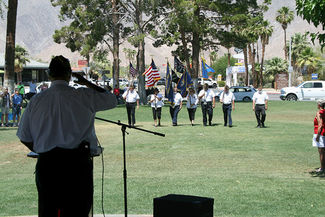 Every year, the Memorial Day observance at Christmas Circle for those who made the ultimate sacrifice seems to get qualitatively better, and this year was no exception.

Larry Bowen read the poem, "I am a veteran," where the last words, "I left home a child and came home a man," echoed throughout Christmas Circle.

Then precisely at 3 p.m., two-dozen patrons at the AL post stood and observed the National Moment of Silence.

Later that afternoon, Jim Comstock emceed the Memorial Day event for members of the RoadRunner Club. Major Virginia Johnson, rising in the ranks from enlistee to officer, led off the evening with her rendition of the Star Spangled Banner, accompanied on piano by Barbara Marlatt.

Guest speaker Patrick McCarthy, president of the Association of the Army, San Diego Chapter, gave the Memorial Day message about ongoing efforts to connect military families with civilian support groups and activities. A big problem is that PTSD runs rampant, and vets need to be treated properly.

Johnson then read the names of recently deceased RRC veterans, and Comstock rang a bell after each name was announced. Also honored were spouses and relatives of deceased veterans.

The final act of the evening was to take a photograph of all veterans in attendance who served in the Army, Air Force, Navy, Marine Corps, and Coast Guard.

It was a thoughtful day in Borrego Springs as folks remembered the importance, and sacrifices, of military service.

Full story in the June 14 issue of the Borrego Sun.