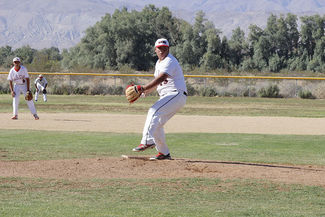 The Borrego Springs baseball team played at home against Mountain Empire and Victory Christian May 8 and May 11.

In the game against the Mountain Empire Redhawks, head coach Marc Meadors admired the work put in by his pitchers.

"I thought that both pitchers Victor Arias and Juan Carmona did a very good job, and they have been doing a very good job all season," he said. "Our challenge continues to be making routine plays and getting outs when we need them. We should expect that when we have two outs, you get a ground ball to the short stop to first or wherever and that's converted, and occassionaly it hasn't been but it should be."

The first inning was a bit rough for the Rams. With bases loaded and no outs, junior pitcher Trevor Elliot hit a bases clearing double to put them on the board, 3 – 0.

The Rams attempted to answer back and it looked bright, as lead-off hitter junior short stop Fernando Alcaraz hit a single down center field. Then a 1 – 3 grounder moved him over to second, followed by a walk, the Rams had two on base with just one out.

However, Elliot whiffed the following two batters leaving them on base.

The Redhawks continued their hot bats and brought in four more runs in the second inning and four more in the third to lead 11 – 0.

Meadors then made a pitching change, bringing in junior Juan Carmona.

"Victor has pitched one of the best games he did in his entire life," Meadors said. "Then Juan came in and shut them out for 2 & 2/3 innings and they did a great job.

Carmona closed out the third for Arias, and with solid pitching, managed to get the batters swinging.

The Rams had another chance to avoid the shut out, after sophomore right fielder Andres Reyes was hit by a pitch. Then with a soft grounder by Alcaraz, he managed to get on first but the force out on second. Though, the Rams could not bring him home, again, leaving a runner on base.

Carmona shut out the Redhawks in the fourth and fifth innings with a K or forcing a flyout to the outfield.. However, they did the same right back with 1-2-3 innings.

The game was then called due to the mercy rule after five innings.

The season overall, Meadors said, has been one he couldn't be prouder of.

"I've asked each guy to step up and play a different position than what they are used to because of the number of people who didn't play this year, became inelgible or injured, so we had a lot of guys to play a new position without complaining," Meadors said. "I could not be any prouder of each guy."

The team is back on the field one last time May 17 as they wrap up the regular season against Calipatria. First pitch is at 3:30 p.m.