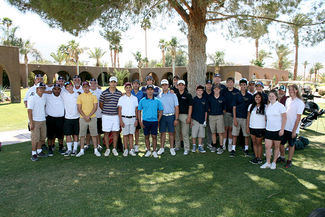 In the Citrus League finals at the Borrego Springs Resort last week, our Borrego High golfers gave it all they had. It was enough to finish second in the finals behind Vincent Memorial and ahead of St. Joseph Academy, and tied for second in league play.

Michael Esquivel earned a spot on the 1st Team Individual All League, and Lucas Morales to the 2nd Team.

Vincent Memorial won both the finals and the league championship and will go to the 2-day CIF playoffs starting May 7 at San Diego's Admiral Baker course.

Coach White also gave credit to assistant coaches Mitch Mossay and Paul Taylor, and to the Rams team members ending the season tied for second in the Citrus League: "Outstanding group of coaches working with a great group of kids." Mossay added his thoughts as well: "I am very happy with the team's overall improvement this season and thank Charles Delorey, the Director of Golf at the Borrego Springs Resort, for his excellent instruction and assistance."

Coach White summed up this year's efforts, "Awesome season," he said. "We finished with 10 players on the roster with only two seniors." He has his eye on the future. "Looking forward to building off of our successes this year, competing for a league championship next season, and a birth in the CIFSDS Division III Playoffs. GO RAMS!"

The Rams play all their home matches "at a great home course at the Borrego Springs Resort," White said.

They will be back at The Resort next season.