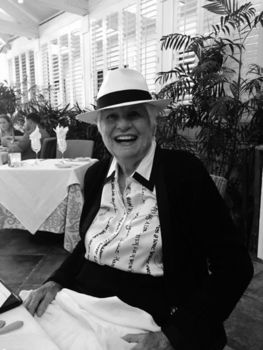 Patricia was born April 17, 1924 in Los Angeles. She was the third of four children. George Kuhrts II and Clara Berg Kuhrts were her father and mother. Charlotte and Clara Lee were her sisters and George III, her brother. She had two step-brothers, Perry and Alphonse Burnand Jr. – the "All-Six" as they were affectionately identified over the years.

From an early age, along with her siblings, Patricia loved her father and mother and the Kuhrts story. She and her father, an accomplished engineer, traveled across California and Mexico constructing and maintaining boilers and other industrial machinery.

She found in her Grandfather an exemplary philanthropist whose generosity animated her lifelong generosity. Her intrinsic sense of goodwill towards humanity and the disadvantaged was fueled by the teachings of Mary Baker Eddy, the founder of Christian Science, whose writings told of the primacy of the spiritual life.

Pioneer Kuhrts was elected to the first City Council of Los Angeles and appointed the second chief of the Los Angeles Fire Department. His son, George I, went on to become a beloved "Angel" of Los Angeles through philanthropy and leadership of the Los Angeles Rail Company founded by Henry Huntington. In turn, his son, George II, innovated as an engineer widely credited with the discovery of the Steam Roller. The women of the family were gracious to one and all including those who fell on hard times during the Depression.

About the middle of the 1930s, Clara and George II divorced and Clara remarried Alphonse Burnand, acknowledged as an entrepreneur, agribusinessman, and early pioneer of the Borrego Valley.

Al had two sons from his first marriage, Alphonse Jr (Sonny) and Perry. Thus, the combined family of six children grew up together as a family unit and they constituted the development engine of Borrego Springs well into the 1980s where George III raised his family. George and his wife Beverly made an indelible mark on the infrastructure, water, roads, schools, churches, real estate and life of Borrego Springs.

Patricia has the fondest of memories when speaking of how she and her brother took over the "Borrego Lodge" where he headed up the kitchen and she the operations. They worked intensively as a team. Later, it was sold to the Copleys and is now the storied La Casa del Zorro.

Towards the end of WW II, Patricia married W Plummer. They had a daughter Pamela followed by a divorce.

In 1949, Patricia married Lane Willie Sharman Sr., a captain for United Air Lines. Patricia gave birth to Shelley in 1950 and Lane Willie Sharman Jr in 1952. Shelley was run over in a tragic accident in 1955. In 1959, the family adopted Patricia Lou. In 1963, Patricia remarried Robert Di Giorgio and remained married until his death in February, 1991.

In San Francisco, Patricia flourished as a progressive. She led the United Nations Association and spoke before the UN. She led programs for water and women's rights around the world. She was an activist. And, she sought to make San Francisco the home of a World Centre which she worked on to the end of her life.

She made friends easily and supported many causes including the United Farm Workers of America, an indication of her independence during her marriage. She and Bob traveled often to Europe encouraging her children to do the same, where Lane attended the American University of Paris becoming the "Fils Americain" of Elisabeth Deren, doing well today at 103.

In the 1970s, Pamela married Kenneth Rogers and they had a son, Jason Rogers.

Patricia died in Encinitas, California of natural causes on the night of April 16, 2018, one day before her 94th birthday.

She is survived by Pamela, Lane Jr, Patricia Lou and her grandson Jason. She is loved and remembered by many.

These include Kuhrts nephews and nieces, friends from her childhood, and many in San Francisco and the Napa Valley where her class, elegance and sharp wit always left a fine impression.