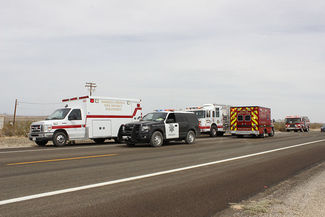 A privately chartered helicopter crashed in the badlands, at the eastern end of Borrego Springs Monday April 30, the four passengers suffered minor injuries.

The pilot made an emergency landing, after the engine stopped, and with wind gusts of about 30 mph, caught the chopper as it was attempting to land. The tail rotor hit the ground breaking off, and the helicopter landed on its right side.

At around 1:30 p.m., the Borrego Springs Fire District received a call that a helicopter had crashed. Fire units, paramedics, sheriffs, park rangers and MERCY aircrews were on the scene.

The passengers on the Robinson R-44 helicopter were coming from Rams Hill after a round of golf, heading back to Palm Springs when the crash occurred. The pilot did a great job of minimizing the impact. The names of the pilot and passengers has not yet been released.

The three passengers were taken to the hospital with neck braces and minor injuries, flying out of the Borrego Valley Airport. The pilot, who refused medical treatment, stayed behind with the helicopter.

They are currently unsure as of when the helicopter will be removed from the site.

The helicopter is registered to Big Blue, a tour company based in Palm Springs.

The National Transportation Safety Board and Federal Aviation Administration are currently investigating the crash.

Since Jan. 1 2000, there have been 165 people killed in 96 crashes involving Robinson helicopters in the United States, according to NTSB records.