Not So Secret Garden Blooms 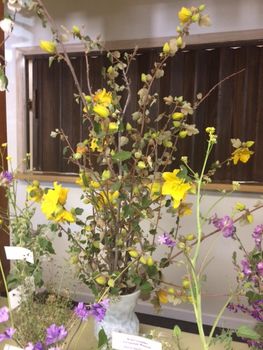 It happens in Julian every spring, usually in May when the hills are aglow with pink, red, yellow, and blue. Flowers, that is.

Every spring, members of the Julian Woman's Club pick samples of the wildflowers that grow here and put on a show in Town Hall.

The first wildflower show was held at an afternoon garden show in1926, the first year the club was organized. Except for some years during World War II, its been held every May.

I asked Marion Moore, who has been a member longer than anyone else, about the first show. Although she wasn't there, Marion recalled that years ago local women Alice Blanc and Mildred Redding were among the early pickers for the Flower Show. She also recalled that some of the best picking has been in Mesa Grande and the surrounding area. She reminded me that all picked flowers come from public places, nobody's garden.