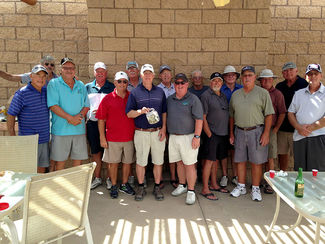 The Borrego High School Rams golf team is holding their own, and then some, in the Citrus League Division.

The latest match was a three-way event at the Borrego Springs Resort, where the Rams took the win over St. Joseph Academy and Escondido Adventist Academy (EAA).

Head coach Tim White says he is, "Super proud of our team" and added it was a great day for all three teams involved.

The next opportunity to come out to BSR and support the golf team is mid-afternoon April 17, followed by another home game two days later on April 19.

Check with the school for confirmation of day and time.

Speaking of support, the Coyotes Club at The Springs at Borrego, having concluded their season play every Thursday, are donating cash received from fees and winnings returned to the pot towards golf shirts and hats for the Rams golf team.

The exact amount has yet to be determined, but we'll do a special report on those two home games and have photos of the kids all decked out in their new gear.

The golf season ends for the Rams on April 24 with an away game at St. Joseph Academy, followed by the Citrus League golf finals April 26, at a site yet to be determined.