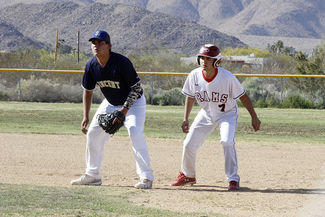 After a two-out 2-2 count walk-off single by freshman center fielder Gabriel Milyard April 5 for their first win back from break at home, the Rams hoped to carry that momentum over the following week against Vincent Memorial.

The Rams baseball team were faced with another challenge, down two in the bottom of the seventh, but were unable to get the result they wanted, losing 5 – 3, April 10.

"This is probably one of the best games we've played of the season from a hitting standpoint. We were more aggressive at the plate than we have been all year," head coach Marc Meadors said. "It's always exciting to get a win, especially a league win, but this one hurts because they're a good team and we had them that close."

They also faced the Hamilton Bobcats in a non-league matchup April 13 at home, and were out-pitched and out-hit, 16 – 3.

The Scots of Vincent Memorial were on the board early. With a wild first inning, the team managed to bring in two runs with no outs.

Despite the two, junior pitcher Juan Carmona struck out the following three batters to limit the damage.

"We're trying to get better and work on the fundamentals for those types of things," Meadors said.

The Rams bats came alive in the bottom of the sixth inning. After back-to-back singles to start off the inning, sophomore second baseman Ulices Vilchez continued the rally with a single toward right field to bring in a run.

Senior first baseman Miguel Barron battled it out at the plate, eventually found his pitch, and hit a two-run single, to cut the deficit to 5 – 3.

The Rams hoped to close out the game with the win, entering the bottom of the seventh and final inning.

Lead-off hitter junior shortstop Fernando Alcaraz started the inning with a single down center, and Carmona drew the walk.

However, the Rams fought until the end, but were unable to bring them home.

"We still have things to work on. Some errors in the outfield that cost us some runs, and as close as it was, those runs make the difference," Meadors said. "I can't complain though. They're getting better."

Meadors emphasized that this team continues to work hard and never quit.

"I've coached a lot of baseball and 9 kids out of 10 would hang their heads in a ball game, but them, they never quit," Meadors said. "They bat all the way to the end ."