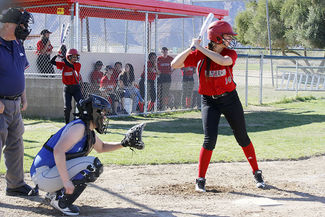 The Lady Rams softball team was victorious in their first home game of the season, defeating the Hamilton Bobcats, 10 – 6.

The teams met a couple of weeks ago for the first game of the 2017 – 18 season, and the Rams fell in extra innings. This time, the Lady Rams were swinging big, and managed to hold their lead.

Senior pitcher Elizabeth Torres was an ace on the mound and at the plate.

The Lady Rams were on the board early in the bottom of the first inning, after a force out at second, bringing home freshman short stop Marla Manzano, who reached third on an error, 1 –0.

The team added another in the bottom of the second, after Hamilton senior pitcher Kaye Lopez allowed a walk, and Torres brought her home with a single down center, 2 – 0. Then a couple of wild pitches brought another runner home, 3 – 0.

The Lady Bobcats got on the board in the top of the third inning. A walk was allowed to junior center fielder Sedona Dawes-Vollmer, leadoff hitter. Sophomore catcher Lydia Adams managed to hit a single, forcing the out at second. But Lopez, who was dominant against the Lady Rams on the mound and at the plate in the first game two weeks ago, doubled to bring in Adams from second, 3 – 1.

In the bottom of the fifth inning, things seemed to be going the Lady Rams' way.

With no outs, and bases loaded, Torres stepped up to the plate and did exactly what she needed to do. Brought home the runs.

Torres went 3-for-4 with a walk and four RBI.

Junior short stop Kirsten Pellegrino hit an inside the park homer for the Lady Bobcats to get another run on the board, 7 – 2. But the Lady Rams answered right back, and scored three runs in the bottom of the sixth, 10 – 2.

The Lady Bobcats were beginning to find some rhythm in the top of the seventh inning.

Major flashbacks of the first time the teams met were coming back. Consecutive singles and errors brought in a few runs, as the deficit was cut to 10 – 6.

But a sweet double play by the infield helped a whole lot. Then a tag to get the runner at third base helped seal the win.

The season is still young, and the team is putting the pieces together. There are a few things to work on at the plate, but improvement sure is there.

The team is back on the field at home against Vincent Memorial. First pitch is at 3:30 p.m.