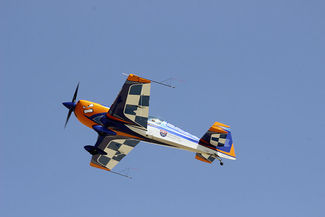 An aerobatic contest is all about precision flying. Unlike air shows, Acrofest pilots, flying in six categories, follow precise routes and do specific point-ranked figures, while climbing, twisting, stalling and diving.

With all that come about 7-8g's positive and 4-6g's negative on their bodies, with some pulling even higher g's in planes rated for about 10g's-positive to 10g's-negative. By way of reference, the Space Shuttle pulls a max of about 3-g's positive and negative during launch and re-entry, respectively.

This year, there were 20 pilots, each performing their precision three-minute flight programs in five categories. In increasing order of difficulty, they are: Primary, Sportsman, Intermediate, Advanced, and Unlimited. At the end of the contest, smoke trails and amazing maneuvers filled the skies above Borrego Airport in a Freestyle (finale) contest between the two Unlimited pilots, Hiroyasu Endo (last year's Unlimited winner) and Jim Bourke, winner of this year's 4-minute Freestyle contest and the Unlimited category winner.

The Acrofest held in April and October each year in Borrego Springs (and in many locales around California and the country) is an event focusing entirely on satisfying not an audience, but rather a judge. He deducts for every error, major and minor: Staying within a square only one kilometer on a side "that looks like a postage stamp at 2,000 feet," according to several pilots (judges are positioned to check for planes going outside the box); dipping below the minimum height above the ground; turns not tight enough or snap rolls not fast or clean enough; incomplete or over-rotations; and the briefest loss of absolute focus during the time- and speed-sensitive maneuvers (over 200 mph in a dive) causing a slip-up noticeable by the judge.

The week before our next Borrego Days Festival in October, 30+ pilots will compete in the Borrego Acrofest.

To enhance your viewing pleasure, bring a chair and binoculars (and refreshments). The wind was a factor in competition this time around, so everyone's hoping for no winds at all in October.

Full story in the April 19 issue of the Borrego Sun.