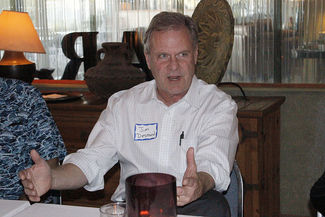 Jim Desmond has been to Borrego Springs several times now, always showing concern for our two main issues: 1) Aquifer depletion and the mitigating measures to counteract it, and 2) the trade-offs between preservation of our desert lands and economic development.

Here at the Sun, we have listened to what Desmond has said during appearances and fundraisers, asked questions, and received answers both in person and in writing. While not completely up to speed on specific water-related issues and particulars about local development, Desmond has taken the time to meet with and listen to community leaders in and out of local government who understand the intricacies of both. We are satisfied with his past leadership as mayor, responses to our concerns, and his demeanor.

However, the one issue about which all Borregans would like the prospective supervisor to address is the Rudyville zoning issue.

With only limited economic benefit accruing to the developer versus a host of environmental and socio-economic disruptions if the re-zoning goes through, the Rudyville project is one where Desmond can demonstrate not only his ability to rather quickly grasp the basic concerns and considered objections of Borregans and County planning officials, but also demonstrate his influence with the other members of the Board of Supervisors.

We are counting on Desmond getting up to speed quickly on Rudyville, that he sees what is truly at stake, and weighs in on the issue soon. There are probably many potential projects within District 5 where the affected community could benefit from rezoning for higher density development, but the Rudyville project in Borrego Springs is not one of them.

All things considered, Jim Desmond is the one and only person suitable for the job as San Diego County's 5th District Supervisor.

We are proud to be the first newspaper in the County to endorse him.